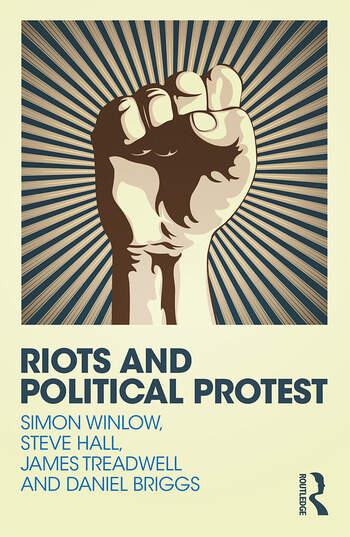 The years 2008 to 2013 saw a new generation of political protestors take to the streets. Riots disrupted many Western cities and new protest movements emerged, keen to address a bleak context of economic collapse and austerity politics.

In this groundbreaking new study, Winlow, Hall, Briggs and Treadwell push past the unworldly optimism of the liberal left to offer an illuminating account of the enclosure and vacuity of contemporary politics. Focusing on the English riots of 2011, the ongoing crisis in Greece, the Indignados, 15M and Podemos in Spain, the Occupy movement in New York and London and the English Defence League in northern England, this book uses original empirical data to inform a strident theoretical critique of our post-political present. It asks: what are these protest groups fighting for, and what are the chances of success?

1. Introduction  2. Part I: Gulags and Gas-chambers  3. Part II: The liberal attack upon Utopianism  4. The Return of Politics: The EDL in Northern England  5. The consumer riots of 2011  6. What was Occupy?  7. Spain and the Indignados  8. The Trouble with the Greeks  9. Conclusion.

Steve Hall is Professor of Criminology at Teesside University and Co-Director of the Teesside Centre for Realist Criminology. He is author of Theorizing Crime and Deviance (Sage, 2012), and co-author of Revitalizing Criminological Theory (Routledge, 2015), Rethinking Social Exclusion (Sage, 2013), Criminal Identities and Consumer Culture (Routledge, 2008) and Violent Night (Berg, 2006). He is also the co-editor of New Directions in Criminology (Routledge, 2012).

James Treadwell is a lecturer in Criminology at the University of Birmingham. He is the author of the best-selling textbooks Criminology (2006) and Criminology: The Essentials (2012). He is perhaps best known as an ethnographer, and he has published articles in a number of leading criminology and criminal justice journals.

Daniel Briggs is Professor of Criminology at the Universidad Europea in Madrid. He is the author of Deviance and Risk on Holiday (Palgrave MacMillan, 2013) and Crack Cocaine Users (Routledge, 2012) and co-author of Culture and Immigration in Context (Palgrave MacMillan, 2014) and Assessing the Impact and Use of Anti-Social Behaviour Orders (Policy Press, 2007). He is also the editor of The English Riots of 2011 (Waterside Press, 2012).

‘Are riots a politics of resistance, or just free shopping trips? Has consumerism beaten politics? This engaging, principled and important study is both an exploration of the disturbances in Europe since the financial crash of 2008 and an investigation of the chances and shape of politics in a world where neo-liberalism seems to have won. Riots and Political Protest is a powerful call to think - and act - anew.’ - Keith Tester, Professor of Sociology, University of Hull, UK

‘From New York, to Spain to the North of England, this book gives space to some of the forgotten voices of the last decade. These voices, cast aside by the insistent grasp of neo-liberal economics, are without a politics or a political space in which liberal democracies permit them to be heard. This is a provocative, empassioned, challenging, data-driven, read. If you didn't have a view about the nature of politics and economics before reading this book, you certainly will have after finishing it.’ - Professor Sandra Walklate, Eleanor Rathbone Chair of Sociology, Department of Sociology, University of Liverpool, UK

‘In the best traditions of critical scholarship, Winlow, Hall, Briggs and Treadwell take stock of our "post-political present", bringing powerful new insights, and a fresh energy to understanding the nature of contemporary opposition, protest, and antagonism. Written with intellectual precision, wide-ranging theoretical engagement and their characteristic wit, Riots and Political Protest will be a landmark text for academics, students, activists, commentators and politicians who have the courage, commitment, and vision to imagine alternative political landscapes.’ - Elaine Campbell, Professor of Criminology, Newcastle University, UK

'In their survey and analysis of recent social movements, riots and protests the authors offer a particular and radical vision of our contemporary world and its potential futures. Anyone with an interest in this field, will undoubtedly want to engage with this book.' - Tim Newburn, Professor of Criminology and Social Policy, London School of Economics, UK

'The book is well-written and fundamentally radical... a superbly critical yet optimistic reading of post-crash movements.' - Sam Burgum, Antipode: A Radical Journal of Geography

'This book should make important reading for social movement scholars. The authors have clearly captured the impasse of progressive politics today... Winlow, Hall, Treadwell and Briggs’ proposal is as straightforward as it is radically impossible: ditch the politics of identity and small-scale reform; take courage to imagine a radically different world.' - Raphael Schlembach, Social Movement Studies: Journal of Social, Cultural and Political Protest

(Riots and Political Protest) "is the most refreshing ‘criminology’ book I have read for a long time and also one of the most important. It should have great interest for all social science students and anyone interested in neoliberalism in general, and/or its insemination of British political and cultural discourses in particular…. the sheer verve and intellectual seriousness of Riots and Political Protest make it essential reading for anyone looking for a reinvigoration of academic approaches to the politics of crime." - Pat Carlen, Honorary Professor, University of Leicester, British Journal of Criminology

"Founded on a powerful combination of ethnographic engagement and critically informed thought and theory, Riots and Political Protest represents a truly stunning piece of scholarship that reveals with stark, if sometimes depressing, brilliance the ‘reality of our times’. Importantly, this book’s most valuable contribution is without doubt the dialogue it begins to open up around what we might do about this current predicament. It begins the difficultbut vital conversation of how the Left might rejuvenate itself and provide a universalist political narrative on the manifold inequalities and harms that continue to plague the lives of marginalised populations globally. It confronts the difficult question of how we might yet jump-start the stalling engine of history and return to politics in a genuine, progressive form. This is a hugely significant and timely contribution that simply must be read by anyone who is serious about mounting a challenge to the dominance of the, now largely indistinguishable, centre Right and liberal Left." -  Anthony Ellis, University of Salford, The Sociological Review