Routledge Handbook on the Global History of Nursing NIP 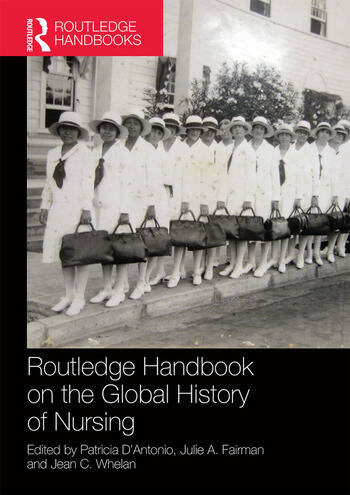 Routledge Handbook on the Global History of Nursing NIP

2014 winner of the American Association for the History of Nursing’s Mary M. Roberts Award for Exemplary Historical Research and Writing!

The Routledge Handbook on the Global History of Nursing brings together leading scholars and scholarship to capture the state of the art and science of nursing history, as a generation of researchers turn to the history of nursing with new paradigms and methodological tools.

Inviting readers to consider new understandings of the historical work and worth of nursing in a larger global context, this ground-breaking volume illuminates how research into the history of nursing moves us away from a reductionist focus on diseases and treatments and towards more inclusive ideas about the experiences of illnesses on individuals, families, communities, voluntary organizations, and states at the bedside and across the globe. An extended introduction by the editors provides an overview and analyzes the key themes involved in the transmission of ideas about the care of the sick. Organized into four parts, and addressing nursing around the globe, it covers:

Exploring themes of people, practice, politics and places, this cutting edge volume brings together the best of nursing history scholarship, and is a vital reference for all researchers in the field, and is also relevant to those studying on nursing history and health policy courses.

Patricia D’Antonio is Killebrew-Centis Endowed Term Chair in Undergraduate Nursing Education, and Chair at the Department of Family and Community Health at the University of Pennsylvania, USA. She is the editor of the Nursing History Review, official journal of the American Association for the History of Nursing.

is Nightingale Professor of Nursing and Director of the Barbara Bates Center for the Study of the History of Nursing at the University of Pennsylvania, USA.

is Adjunct Associate Professor of Nursing and the Assistant Director of the Barbara Bates Center for the Study of the History of Nursing at the University of Pennsylvania, USA.

‘Each article is well written and extensively documented. The editors/nurse historians have selected stellar pieces of historical research to craft a cutting-edge work that will be appreciated by undergraduates, graduates, and researchers of nursing, nursing history, and health policy. Summing Up: Highly recommended. All nursing students, researchers/faculty, and professionals/practitioners.’ – D.B. Hamilton, emerita, Western Michigan University, in CHOICE, March 2014