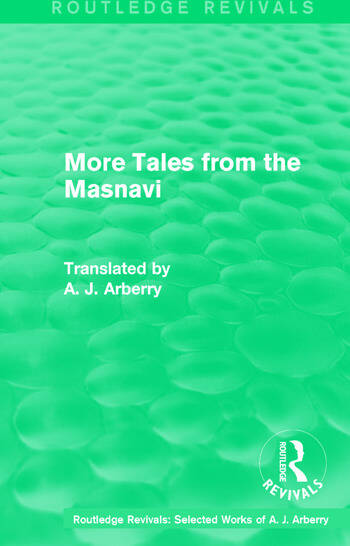 First published in 1963, this work puts into clear and rhythmical English one hundred stories and apologues of the Masnavi of Rumi.

Composed over a period of many years during the thirteenth century, as a manual of instruction and initiation into spiritual life, the Masnavi has long been acclaimed the greatest mystical epic of Islam. The tales were designed to illustrate in human terms the often complex doctrine, and this they do with a wealth of beauty, honour and pathos, as appealing to the modern reader as to the medieval audience to which they were originally addressed. The volume, like its predecessor Tales of the Masnavi, is included in the UNESCO list of representative great works of world literature.

This work will be of interest to those studying Islam and Middle Eastern literature.

Introduction; The incontinent lover, on the sin of arrogance; The preacher who prayed for sinners; The Sufi who answered his unfaithful wife obliquely; The tanner who fainted, on suiting the cure to the ailment; Othman in the pulpit; Solomon and the Queen of Sheba; The clay-eater and the druggist; The dervish’s dream; The conversion of Ibrahim ibn Adham; The man who dropped walnuts into a stream; The infant Muhammad lost and found; The Sufi in the orchard; The king and his slave, on the proper answer for fools; The scholar and the thief; The false panegyrist; The Prophet and the young man of Hudhail; Bayazid and his disciples; The three fishes; The fowler and the bird; Pharaoh and Moses; Ali and the child, on congeneity; Muhammad and the Bedouin chiefs; The end of the story of Moses and Pharaoh; The king, the boon-companion and the courtier; Moses questions God’s purpose; The prince and the Witch of Kabul; The drought and the laughing ascetic; The mule and the camel; The Egyptian and the Israelite; The woman and the pear-tree; The descent and ascent of Man; Alexander the Great and Mount Qaf; The pen and the ants; The four birds: the duck; The greedy unbeliever; The four birds: the peacock; The Bedouin and his dog; The sage and the peacock; The four birds: the crow; The gazelle and the asses; The four birds: the cock; The man who claimed to be a prophet; The faithful lover; The mystic and the puppies; The creation of Adam; The simpleton and his answer; King Mahmud and Ayaz; Nasuh’s repentance; The ass and the Arab horses; The fox and the ass; The ascetic who trusted in God; The man who feared to be taken for an ass; Shaikh Sar-razi of Ghazna; The parable of the anxious cow; The monk who searched for a man; The thief in the orchard; The bold dervish of Herat; Majnun and Laila’s beauty; The muezzin with the evil voice; The greedy wife and the cat; The merry prince and the Christian ascetic; Dalqak and the King of Tirmidh; The wife and the guest; The girl who married beneath her; The Sufi who was a coward; The story of ‘Iyadi; The caliph and the general; The bird and the fowler; The watchman who fell asleep; The Turk and the minstrel; The poet and the Shi’ites of Aleppo; The midnight drummer; The devotion of Bilal; How Abu Bakr bought Bilal from his Jewish master; The amir and the refractory horse; Muhammad visits Hilal; The disappointed beggar; The hag who hankered for a husband; Sultan Mahmud and the Indian boy; The sick man, the Sufi and the Cadi; The Turk and the tailor; The Sufi and the tailor; The Sufi and the priest; The poor man and his nagging wife; The answer to the pauper’s prayer; Shaikh Abu ‘l-Husain and his wife; The camel, the ox and the ram; The Jew, the Christian and the Muslim; How Dalqak rode to town in haste; The mouse and the frog; King Mahmud and the thieves; ‘Abd al-Ghauth and the Peris; Ja’far attacks a fortress single-handed; The dervish debtor and the Inspector of Tabriz; The ruler of Bukhara and the jurist beggar; The drunken king and the reluctant jurist; The man who sought for treasure; Goha, his wife and the cadi; God speaks with the Angel of Death; The child and the bogy; Notes.