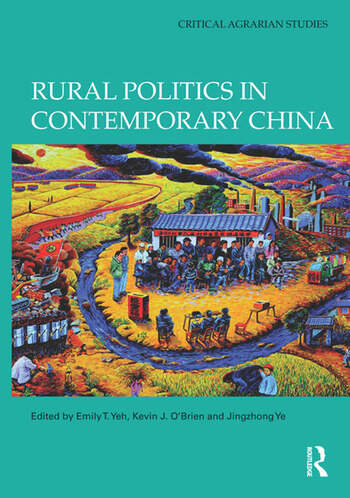 This collection provides an overview of China’s rural politics, bringing scholarship on agrarian politics from various social science disciplines together in one place. The twelve contributions, spanning history, anthropology, sociology, environmental studies, political science, and geography, address enduring questions in peasant studies, including the relationship between states and peasants, taxation, social movements, rural-urban linkages, land rights and struggles, gender relations, and environmental politics. Taking rural politics as the power-inflected processes and struggles that shape access and control over resources in the countryside, as well as the values, ideologies and discourses that shape those processes, the volume brings research on China into conversation with the traditions and concerns of peasant studies scholarship. It provides both an introduction to those unfamiliar with Chinese politics, as well as in-depth, new research for experts in the field.

This book was published as a special issue of the Journal of Peasant Studies.

1. Rural politics in contemporary China  2. A century of rural self-governance reforms: reimagining rural Chinese society in the post-taxation era  3. Debating the rural cooperative movement in China, the past and the present  4. Chinese discourses on rurality, gender and development: a feminist critique  5. Finance and rural governance: centralization and local challenges  6. Measurement, promotions and patterns of behavior in Chinese local government  7. Rightful resistance revisited  8. Violence as development: land expropriation and China’s urbanization  9. In defense of endogenous, spontaneously ordered development: institutional functionalism and Chinese property rights  10. Internal migration and left-behind populations in China  11. The politics of industrial pollution in rural China  12. The politics of conservation in contemporary rural China  13. The politics of water in rural China: a review of English-language scholarship

Emily T. Yeh is Associate Professor of Geography at the University of Colorado, Boulder. She conducts research on nature-society relations in Tibetan parts of the PRC, including the political ecology of pastoral environment and development policies, the relationship between ideologies of nature and nation, natural resource commodity chains, indigenous knowledge about climate change, and emerging environmental subjectivities. Her book, Taming Tibet: Landscape Transformation and the Gift of Chinese Development (Cornell University Press, 2013), discusses the cultural politics and political economy of development in Tibet as a project of state territorialisation.

Kevin J. O’Brien is Alann P. Bedford Professor of Asian Studies, Director of the Institute of East Asian Studies, and Professor of Political Science at the University of California, Berkeley. His books include Grassroots Elections in China (Routledge, 2011) (with Suisheng Zhao), Popular Protest in China (Harvard, 2008), Rightful Resistance in Rural China (Cambridge, 2006) (with Lianjiang Li), Engaging the Law in China: State, Society and Possibilities for Justice (Stanford, 2005) (with Neil J. Diamant and Stanley B. Lubman), and Reform Without Liberalization: China’s National People’s Congress and the Politics of Institutional Change (Cambridge, 1990).

Jingzhong Ye is Professor of Development Studies and Deputy Dean at the College of Humanities and Development Studies (COHD), China Agricultural University. His research interests include development intervention and rural transformation, rural ‘left behind’ populations, rural education, land politics, and sociology of agriculture.