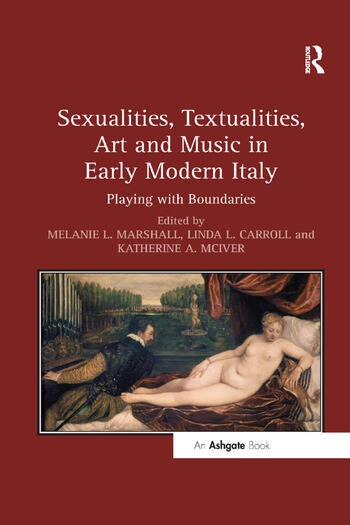 Taking as axiomatic the concept that artistic output does not simply reflect culture but also shapes it, the essays in this interdisciplinary collection take a holistic approach to the cultural fashioning of sexualities, drawing on visual art, theatre, music, and literature, in sacred and secular contexts. Although there is diversity in disciplinary approach, the interpretations and readings offered in each essay have a historical basis. Approaching the topic from the point of view of both visual and auditory media, this volume paints a comprehensive picture of artists’ challenges to erotic boundaries, and contributes to new historicizing thinking on sexualities. Collectively, the essays demonstrate the role played by artistic production-visual arts, literature, theatre and music-in fashioning, policing, and challenging early modern sexual boundaries, and thus help to identify the ways in which the arts contributed to both the disciplining and the exploration of a range of sexualities.

Melanie L. Marshall is a Lecturer in Music and a Marie Curie International Fellow at University College Cork, Ireland. Linda L. Carroll is Professor of Italian at Tulane University, USA. Katherine A. McIver is Professor of Art History (Emerita) at The University of Alabama at Birmingham, USA.

'The contributors to this volume provide a series of vivid episodes that enliven our appreciation of the differences, as well as similarities, between explicit expression both early and modern.' Renaissance Studies

'... if the purpose of a potpourri is to please, this collection has succeeded in its objectives: it will be useful to both scholars and students, and the musical scores will enrich the Renaissance repertoire.' Renaissance Quarterly