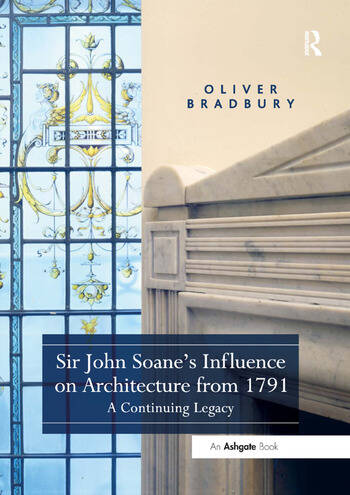 Sir John Soane’s Influence on Architecture from 1791: A Continuing Legacy

Sir John Soane’s Influence on Architecture from 1791: A Continuing Legacy is the first in-depth study of this eighteenth-century British architect’s impact on the work of others, extending globally and still indeed the case over 200 years later. Author Oliver Bradbury presents a compelling argument that the influence of Soane (1753-1837) has persevered through the centuries, rather than waning around the time of his death. Through examinations of internationally-renowned architects from Benjamin Henry Latrobe to Philip Johnson, as well as a number of not so well known Soanean disciples, Bradbury posits that Soane is perhaps second only to Palladio in terms of the longevity of his influence on architecture through the course of more than two centuries, from the early 1790s to today, concluding with the recent return to pure revivalism. Previous investigations have been limited to focusing on Soane’s late-Georgian and then post-modern influence; this is the first in-depth study of his impact over the course of two centuries. Through this survey, Bradbury demonstrates that Soane’s influence has been truly international in the pre-modern era, reaching throughout the British Isles and beyond to North America and even colonial Australia. Through his inclusion of select, detailed case studies, Bradbury contends that Soane’s is a continuing, not negated, legacy in architecture.

Contents: Preface; Introduction; Imitation: a survey of Soane’s influence on his pupils and contemporaries in Great Britain, North America and Australia, 1791-c. 1850, with a case study; The survival of Soane? Wilderness years: collapse of Soane’s influence and reputation; ridicule and critical nadir, 1850-1884; Transmutation: Soane’s influence on late 19th- and 20th-century Classicism, beginning with Beresford Pite, and the revival in interest and a new appreciation of Soane’s achievements, 1885-1956; Soane and modernity: the influence of Soane on 20th-century Modernism and Classical revivalism, 1953 until now; Select bibliography; Index.

Oliver Bradbury, MLitt, is an independent researcher, based in London, UK.

A Yankee Book Peddler US Core Title for 2015

'Sir John Soane’s Influence on Architecture from 1791 is an important addition to the body of research on Soane’s enduring influence as a collector, educator, thinker, and radical architect. Bradbury’s book is an engaging and thought-provoking reminder of the importance of Soane’s legacy as an inspiring resource for subsequent generations of architects and designers that continues to this very day in many examples of contemporary creative practice.' Abraham Thomas, Director, Sir John Soane’s Museum, UK

’This brilliant and thoroughly researched book successfully challenges the widely held belief of architectural historians that Soane did not have a major or significant influence on his contemporaries or successors. Our view of Soane will thus be transformed by Bradbury's detailed and fresh account of 19th- and 20th-century architecture.’ David Watkin, Emeritus Professor, University of Cambridge, UK

'Here is an interesting and enjoyable book that is as valuable for the questions it raises as much as for what it actually says.' Cercles