Social Justice and Educational Measurement
John Rawls, the history of testing, and the future of education 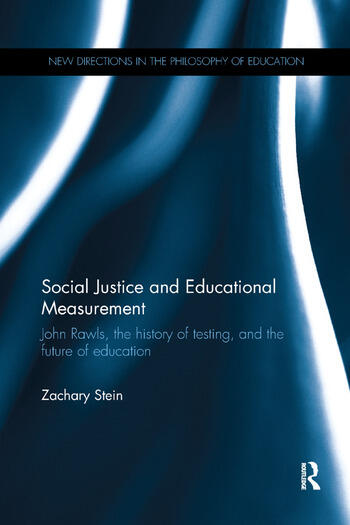 Social Justice and Educational Measurement: John Rawls, the history of testing, and the future of education

Through analysis of several historical case studies that exemplify ethical issues related to testing, this book explores and propounds speculative design principles and arguments in favour of radically democratic school reforms, which address how the future of testing might be shaped to ensure justice for all. These case studies cover the widespread use of IQ-style testing in schools during the early decades of the 20th century; the founding of the Educational Testing Service; and the recent history of test-based accountability associated with No Child Left Behind.

will be essential reading for academics, researchers and postgraduate students in education, testing and assessment, and the philosophy of education. It will also be of interest to policymakers and educational administrators.

Zachary Stein was educated at Hampshire College and Harvard University. He is the chair of the education program at Meridian University and the Academic Director of the activist think-tank at the Centre for Integral Wisdom.

Praise for Social Justice and Educational Measurement by Zachary Stein:

'Social Justice and Educational Mesurement provides a powerful argument that properly constructed, properly used standardized tests can be a force for social justice rather than an impediment to it.'
– Catherine Z. Elgin, Professor of the Philosophy of Education , Harvard Graduate School of Education

'Zak Stein’s book is more than simply a work of genius, it is one of the most important books of the last decade. Stein addresses a profoundly significant societal issue -- educational measurement and social justice…. Ultimately, Stein sees testing infrastructures as basic structures of society that require radical reworking and redesign. Stein’s book will be a landmark text shaping these redesign efforts in the decades to come. Everyone needs to read this book.'
– Michael Hogan, Senior Lecturer in Psychology, National University of Ireland, Galway

'This book is a welcome and much needed deepening of the philosophical, ethical, and political discussions surrounding standardized testing. Not only does it offer a fascinating introduction for educators to one of the 20th century's most important ethical theorists, John Rawls, it does so in the context of the history of testing, from the IQ through the SAT to NCLB. Anyone interested in the future of our educational system will benefit from reading this important book.'
– Scott Barry Kaufman, Scientific Director of the Imagination Institute, University of Pennsylvania, Author of Ungifted: Intelligence Redefined

'Stein’s accomplishment in Social Justice and Educational Measurement is impressive. He provides the reader with a penetrating critical analysis of the educational system in the United States. The position developed is philosophy at its best. From a Rawlsian ethical perspective, he demonstrates that the American educational system has been at times both unethical and unjust, undermining learning and healthy personal development. Directly under scrutiny is the history of standardized testing and “accountability,” as well as the emerging forms of resistance and activism being initiated by those enduring inhumane conditions in our schools. Stein does not stop at his devastating normative critique; he issues an urgent call for political action and change.'
– Hans G. Despain, Chair of Economics and Honors Program, Nichols College