Soviet Economy and the War bound with Soviet Planning and Labour 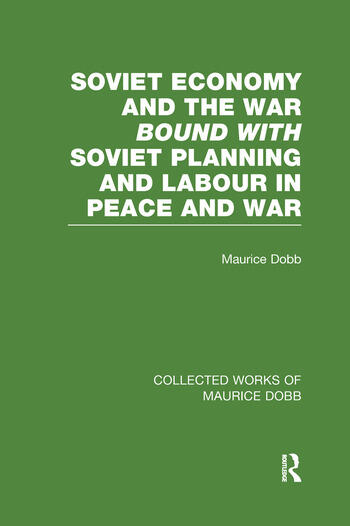 Soviet Economy and the War bound with Soviet Planning and Labour

In Soviet Economy and the War the author presents a concise factual record of Soviet economic developments during a short period. This book outlines the economic planning and performance that accompanied the military training and preparation to meet the onset of Nazism.

To some extent complementary to Dobb's Soviet Economy & the War, the author offers detailed studies of a few special aspects of the Soviet Economic System.

1. Introduction. 2. Russia Before the Five Year Plan. 3. The First Five-Year Plan. 4. The Second Five-Year Plan and the Third. A Note on Some Estimates of Mr Colin Clark. 5. What is the War Potential of the USSR? 6. The Location of Soviet Industry. 7. Collective Farms. 8. The Role of the Trade Unions. 9. The Plan and the Budget.

Preface. 1. Economic Planning in USSR. 2. The Soviet Financial System. 3. Work and Wages. 4. The Economic Effects of the War.

Multivolume collection by leading authors in the field