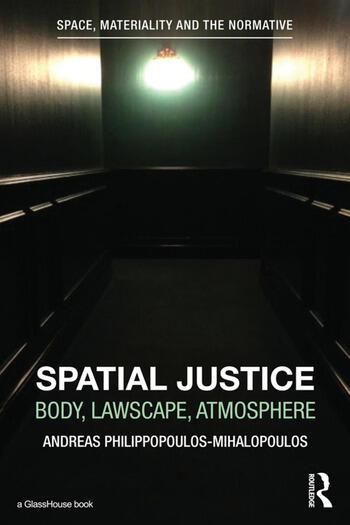 There can be no justice that is not spatial. Against a recent tendency to despatialise law, matter, bodies and even space itself, this book insists on spatialising them, arguing that there can be neither law nor justice that are not articulated through and in space.

presents a new theory and a radical application of the material connection between space – in the geographical as well as sociological and philosophical sense – and the law – in the broadest sense that includes written and oral law, but also embodied social and political norms. More specifically, it argues that spatial justice is the struggle of various bodies – human, natural, non-organic, technological – to occupy a certain space at a certain time. Seen in this way, spatial justice is the most radical offspring of the spatial turn, since, as this book demonstrates, spatial justice can be found in the core of most contemporary legal and political issues – issues such as geopolitical conflicts, environmental issues, animality, colonisation, droning, the cyberspace and so on. In order to ague this, the book employs the lawscape, as the tautology between law and space, and the concept of atmosphere in its geological, political, aesthetic, legal and biological dimension.

Written by a leading theorist in the area, Spatial Justice: Body, Lawscape, Atmosphere forges a new interdisciplinary understanding of space and law, while offering a fresh approach to current geopolitical, spatiolegal and ecological issues.

Andreas Philippopoulos-Mihalopoulos is Professor of Law at Westminster University, London

'Lucid and passionate, this book offers a delicately nuanced and fluid argument accompanied by an astounding breadth of knowledge. Andreas Philippopoulos-Mihalopoulos is a compassionate, funny and sympathetic guide through the lawscape, allowing us to encounter the possibilities for spatial justice. To read it is to experience an abundance of affective engagements with and within the enveloping atmosphere of bodies in law.'

'How to understand justice as being primarily spatial justice, and how to understand the spatiality of law as the proper topos of an enquiry into justice? This book offers a truly original approach to these questions. By relentlessly reminding its readers of law’s materiality, the book shows how spatial justice emerges in the ruptures that call forth the renegotiation and reorientation of lawscapes.'

'Flinging far-fetched fescues of wit at the atmospherics of lawscapes, the poet-jurist Philippopoulos-Mihalopoulos unflinchingly enters the bubble of law and eloquently transforms the entire concept of spatial justice. This is a book of exquisite artistry, a theoretical aria to the withdrawal of logos and escape from law, a brilliant making of space for an immanent and elemental justice.'