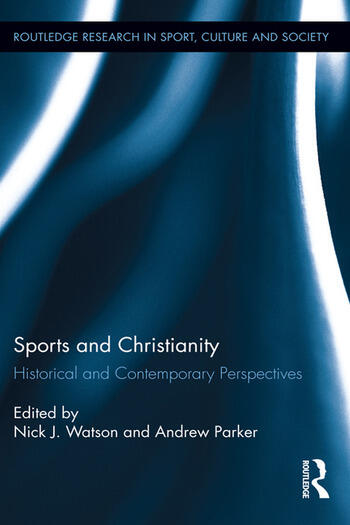 This interdisciplinary text examines the sports-Christianity interface from Protestant and Catholic perspectives. In addition to a "systematic review of literature," field-pioneering contributors such as Michael Novak, Shirl Hoffman, Joseph Price and Robert Higgs address a wide range of topics from the sporting world, including biblical athletic metaphors, disability, evangelism, professionalism and celebrity, humility and pride, genetic enhancement technologies, stereotypes, sport as art and British and American historical analyses of sport and Christianity. Insightful chapters from Scott Kretchmar, one of the world’s leading philosophers of sport, and Father Kevin Lixey, the head of the Vatican’s ‘Church and Sport’ office (2004-), add further depth and breadth to this book, making it accessible and interesting to academic and practitioner audiences alike. Within the context of this relatively new and rapidly expanding area of inquiry, this collection provides a unique and important addition to the current literature for both undergraduate and postgraduate students, and serves as a point of reference for scholars of theology and religious studies, psychology, health studies, ethics and sports studies. The book may also be of interest to physical educators and sports coaches who wish to adopt a more "holistic" and ethical approach to their work. As modern sport is often intertwined with commercial and political agendas, this book offers an important corrective to the "win-at-all-costs" culture of modern sport, which cannot be fully understood through secular ethical inquiry.

Nick Watson is Senior Lecturer in Sport, Culture and Religion at York St John University, and was the Founding Director of the Centre for the Study of Sport and Spirituality (2003-2009). He is the co-author and co-editor respectively of: Sport and Spirituality: An Introduction (2007) and Theology, Ethics and Transcendence in Sports (2011), both published by Routledge.

Andrew Parker is Professor of Sport and Christian Outreach and Director of the Centre for Sport, Spirituality and Religion (CSSR) in the Faculty of Sport, Health and Social Care at the University of Gloucestershire (UoG), UK.

"… this book is an ambitious interdisciplinary collection of material dealing with the confluence between sport and religion. While Michael Novak’s Foreword is effusive in its praise, describing the contents as a ‘treasure of careful and measured studies’ (p. xii) … In my view, despite the inclusion of one or two chapters that strike a slight note of discordance, it is fair to say that Novak’s enthusiasm for the book is not misplaced. The text is divided into two main thematic sections, namely the history/genealogy of debates on the sport/religion relationship, and contemporary philosophical debates surrounding sport and Christianity … with Watson and Parker jointly providing a seminal overview entitled ‘Sports and Christianity: Mapping the Field’…. as a very thorough overview of the literature in the field, it is, dare I say, almost worth the cost of the book itself. Lengthy biographies for the eleven contributors and a solid index complete this very impressive package, a collection that this reviewer cannot really do justice to in terms of its scope and depth and its potential to make its readers think anew about the enduring and complex relationship between sport and Christianity."

"This significant book is a welcome addition to the growing literature on sport and Christianity. It is hard to think of two people in the UK who have done more to encourage and stimulate such thinking than Nick Watson and Andy Parker.  The book’s purpose is to “illustrate is the way in which this relationship has developed in specific social and cultural contexts and how we might think further about the intimate connections (and disconnections) between sport and the Christian faith”.
The book’s ten chapters cover history, philosophy, sociology and theology. The authors include such eminent scholars as Robert Higgs, Shirl Hoffman, Scott Kretchmar, Kevin Lixey Hugh MacLeod and Tracy Trothen.  The longest and most significant chapter is the authors’ “Sports and Christianity: Mapping the Field” which is the most systematic introduction to the academic literature in the field which is available. The authors survey and contexualize what has been written in a chapter which will undoubtedly become a standard text in the field.
This is followed by a table of key resources to help the reader take it further. There is a list of 35 key texts as well as a 32 page bibliography, with enough material there to keep you reading a lifetime.
An extremely useful book which will be essential reading for anyone who is serious about understanding the relationship of sport and Christianity for some years to come". – J.Stuart Weir, Verite Sport

"The essays in Sports and Christianity form a disparate collection, clearing the ground for more systematic inquiry into the intersection of sport and Christian faith...Certain themes recur in the volume: the senses in which sport is a rival or complementary pointer to the "sacred"; the parallels between "flow" or "peak experience" in sport and in the arts and ritual action; the theological and ethical questions raised by "disability" sport and by bio-technological enhancement; the proper part played by the body, given the history of Christian devaluation of the physical as against the spiritual; and the place of sport in Christian education". –Dr Inge

"This is an ambitious book. It largely measures up to its ambition, when it could so easily have faltered, falling between the two stools or parts of its sub-heading. This is a compliment not only to its extremely experienced authors but to its wise editors, though they modestly claim to be relatively recent arrivals in the field, whose first chapter, after their short introduction and the philosophical flourish of Michael Novak’s brief foreword, placing sport firmly within ‘the kingdom of ends, not the kingdom of means’, provides a helpful overview of the field, a hefty 80 page map of this rapidly developing field. The latter is worth the price of this handsome hardcover alone if you want a panoramic overview." –  Dr Gordon Preece is Director of Ethos: EA Centre for Christianity & Society and an Honorary Research Fellow at MCD University, Australia. Published in Australian Religious Studies Review.

“The purpose of this book is to reflect on the ways in which the underpinning principles of the Christian faith might allow consideration of the challenges, values and practices of modern-day sport …   Watson and Parker have put together a stellar cast of scholars featuring the leading writers in this area … Overall, this book represents an absolute must-read for those beginning or experienced scholars with an interest in this field … It is impossible not to agree with a key conclusion of this text; that the lack of empirical research in this area of study represents the most major challenge to our understanding of this most complicated of social interactions.” – Dr Don Vinson, International Review of the Sociology of Sport

“Nick Watson and Andrew Parker, leading researchers in the rapidly developing field of religion and sport, have assembled a work that will become a standard text for future teaching and research. Part I (historical perspectives) begins with a lengthy introductory essay, “Sport and Christianity: Mapping the Field”, a comprehensive review of the key texts in the academic study of religion and sport … The extensive introductory essay by the editors provides an indispensable overview of the academic field of religion and sport from its beginnings several decades ago in the United States. The essay achieves its stated goals of identifying central texts and events (also presented in a systematic time-line); key conversations (on sport as religion, muscular Christianity, theological and ethical reflections on Christian involvement in sport, and the theology of play) and areas for future investigation (theological analyses of exercise and health; reflections on difference in the areas of disability and gender; consideration of Christian traditions of prayer and chaplaincy; and deeper study of aesthetics, human relationships, and popular culture as they intersect with sport and religion). Although it is common for scholars to use the term ‘religion’ when they actually mean only Christianity, Watson and Parker do not fall into that trap. And although they focus on sport as it intersects with Christianity, their survey does not ignore the essential works on sport in other religious traditions.” – Professor Rebecca Alpert, Journal of Contemporary Religion

“In this volume, editors Nick Watson and Andrew Parker present essays that bring Christian principles to bear on historical and contemporary practices in sport … Emphasising that historical developments do not occur in a vacuum, the editors point to the need to consider social, economic and political conditions … While noting that many Christian calls for the ethical rehabilitation of sport have failed to be influential, Watson and Parker argue that qualitative and quantitative empirical research on theology of sport and on the history of Christian involvement in sport could provide an avenue for effecting positive change in sporting institutions and practices. … In sum, Watson and Parker have amassed an array of theological and historical perspectives on the intersection of sport and Christianity with the goal of exploring ways that Christianity might improve contemporary sport.” – Professor Annie Blazer, International Journal of the History of Sport

“In this collection of readings, editors Nick Watson and Andrew Parker seek to examine the relationship between sport and Christianity … from both historical and contemporary perspectives. The book includes contributions from notable scholars including several with extensive publications on sport and Christianity … the editors target this work towards a varied audience—not only students but academics and the general reader as well. In this sense, the finished product certainly fits the audience. This project dedicated to sport and Christianity provides both a timely and insightful look at historical and philosophical perspectives regarding sports and Christianity. Future research along these lines could potentially mine other faith traditions with respect to sport in a similar manner.”  – Professor Douglas Hochstetler, Journal of Sport History

“This is an ambitious book. It largely measures up to its ambition, when it could so easily have faltered, falling between the two stools or parts of its sub-heading. This is a compliment not only to its extremely experienced authors but to its wise editors, though they modestly claim to be relatively recent arrivals in the field, whose first chapter, after their short introduction and the philosophical flourish of Michael Novak’s brief foreword, placing sport firmly within ‘the kingdom of ends, not the kingdom of means’, provides a helpful overview of the field, a hefty 80 page map of this rapidly developing field. The latter is worth the price of this handsome hardcover alone if you want a panoramic overview.” – Dr Gordon Preece, Director of Ethos: EA Centre for Christianity & Society, Honorary Research Fellow at MCD University, Australia. Australian Religious Studies Review