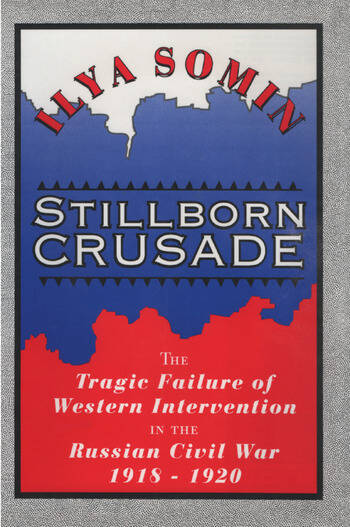 Stillborn Crusade: The Tragic Failure of Western Intervention in the Former Soviet Union

The triumph of the Bolsheviks in the Russian Civil War was the first great crack in the system of international relations established by the victorious Allies. The presence of a powerful anti-Western Soviet regime not only undermined the liberal values binding the signatories and member states of the Versailles Treaty and the League of Nations, but also helped to stimulate the rise of aggressive fascist dictatorships in Germany and Italy. Consequently, the failure of the Allies to intervene effectively against the Bolsheviks helped pave the way for both World War II and the human catastrophe of Soviet totalitarianism. Stillborn Crusade is a reinterpretation of the causes and consequences of that failure.

In sharp contrast with previous researchers, Ilya Somin argues that the West's failure resulted not from constraints limiting the options of policymakers, but from ideological misconceptions, particularly those flowing from the "liberal" and "realist" theories of international politics. The liberal view, based on the right of national self-determination, was espoused by Woodrow Wilson, and David Lloyd George. While unsympathetic to Bolshevism, they remained wedded to preconceived ideas on revolution, intervention, and the efficacy of force. The realists thought that the opposing Whites might constitute a greater threat to Western interests; they discounted the role of ideology in Soviet foreign policy. Against these views, Somin sets the position of Winston Churchill, who repeatedly and unsuccessfully urged decisive action when the Soviet regime was militarily vulnerable. As a consequence of British and American policy failures, the entire course of European and world history was radically altered for the worse.

Stillborn Crusade also considers why earlier scholars, most notably George F. Kennan and William Appleman Williams, have ignored the issues raised here, even though they and others have not hesitated to criticize Western leaders for similar errors in other instances, especially in the case of Nazi Germany. Somin links the errors of 1918-20 to broader issues relating to the morality, feasibility, and desirability of Western, especially American, intervention in foreign civil conflicts. As a volume with important lessons for our own time, Stillborn Crusade will be of interest to historians, political scientists, and foreign policy analysts.

Acknowledgments
1. Introduction
2. The Development of British Policy
3. "Why Not Save Siberia?" The Development of US Policy
4. The Whites Reconsidered
5. Lost Triumphs: The Possibilities of Intervention
Epilogue: Conclusions and Implications
Bibliography
Index