Success and Failure of Countries at the Olympic Games 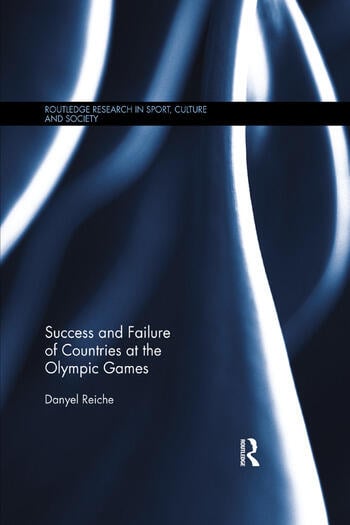 Success and Failure of Countries at the Olympic Games

The Olympic Games is undoubtedly the greatest sporting event in the world, with over 200 countries competing for success. This important new study of the Olympics investigates why some countries are more successful than others. Which factors determine their failure or success? What is the relationship between these factors? And how can these factors be manipulated to influence a country’s performance in sport? This book addresses these questions and discusses the theoretical concepts that explain why national sporting success has become a policy priority around the globe.

Danyel Reiche reassesses our understanding of success in sport and challenges the conventional explanations that population size and economic strength are the main determinants for a country’s Olympic achievements. He presents a theory of countries’ success and failure, based on detailed investigations of the relationships between a wide variety of factors that influence a country’s position in the Olympic medals table, including geography, ideology, policies such as focusing on medal promising sports, home advantage and the promotion of women.

This book fills a long-standing gap in literature on the Olympics and will provide valuable insights for all students, scholars, policy makers and journalists interested in the Olympic Games and the wider relationship between sport, politics, and nationalism.

Danyel Reiche is an Associate Professor for Comparative Politics at the American University of Beirut and a Visiting Scholar at the Harvard University Institute for Quantitative Social Science (IQSS). He has also worked as a visiting Assistant Professor at the School of Foreign Services, Georgetown University, USA, and as a Postdoctoral Researcher at the Freie Universität Berlin, Germany. He is the author of numerous peer-reviewed articles, most recently in European Sports Management Quarterly, International Journal of Sport Policy and Politics, Journal of Energy Policy, Sport in Society, Soccer & Society, and Third World Quarterly

"It turns out that good public policy is key, says Danyel Reiche, who has written a book to try to explain the secrets of Olympic success. He asks, for instance, why Kenya is able to win 29 times as many medals as Saudi Arabia, though it is 17 times poorer. His answer is a policy formula that he terms "WISE," which breaks down into four areas: empower women in order to unlock the potential of half the population; build strong sports institutions in the country; specialize in some sports; and become an early adopter of new techniques and sports." - Fareed Zakaria, Washington Post

"In short, success at the Rio Olympics isn’t correlated with much of anything that people use to judge countries. Rather, as the social scientist Danyel Reiche has asserted, it probably has a lot more to do with how countries choose to allocate resources." - Mark Whitehouse, Bloomberg

"Today the Soviet bloc may have dissolved, but its centrally-planned approach to sports endures: As political scientist Danyel Reiche argues in his new book Success and Failure of Countries at the Olympics (2016, Rutledge), top athletes around the world now benefit from policies pioneered by communist states, half a century ago." - Selina Cheng, Quartz

"Danyel Reiche, associate professor of comparative politics at the American University of Beirut, said wealth and size don’t determine the Olympic success of a country. He cited the poor performance of India despite a population of 1.3 billion and the exceptional performance of Kenya despite a modest economy. In his book "Success and Failure of Countries at the Olympic Games," Reiche proposed the "WISE" formula to perform at a high level. Reiche said "WISE" stands for promoting Women in sports, Institutionalizing national sports promotion, Specializing in particularly promising sports and Early adoption of sporting trends as newly added disciplines." - Joaquin M. Henson, The Philippine Star

"Danyel Reiche, Associate Professor of Comparative Politics at the American University in Beirut, Lebanon, has noted in his book, Success and Failure of Countries at the Olympic Games, that there are several other reasons behind the decrease in the dominance of the traditional medal winners from North America and Europe. One is the inclusion of sports like judo, table tennis and badminton where Asian countries are powerhouses. Rule changes in some sports like boxing and judo, which restrict each country to entering only one athlete, have also helped ensure that winners come from different countries." - Ragini Bhuyan, Live Mint

"In his recent book Success and Failure of Countries at the Olympic Games, Danyel Reiche points to a study that suggests "once governments identify elite sport success as a policy objective they are locked onto a path from which it is increasingly difficult to deviate". – Owen Gibson, The Guardian

"Altogether, the book is well-structured, well-written and based on solid knowledge and research...Success and Failure of Countries at the Olympic Games is an excellent introduction which seems especially recommendable for practitioners and for scholars who are new to the field." - Jan Haut, International Journal of Sport Policy and Politics

"Reiches production provides researchers with such ambitions a base to stand on in further explorations of the subject and has the advantage of being a systematic and comprehensive analysis of what must be regarded as a particularly complex issue. For this reason, it should be interesting for anyone who has ever wondered why some states are successful in the Olympics and other not ..." - Bjorn Sandahl, Swedish School of Sport and Health Sciences, Stockholm

"This book is an excellent introductory explanation to the theme of sports success, bringing major considerations about how countries deal with the Olympics, building strategies for their own elite sports to lead this world competition. Moreover, the book is a blueprint to sport historians who can access a variety of tools to evaluate the historical progression of countries in elite sport, dealing with the changes occurring over time". - Silvestre Cirilo, The International Journal of the History of Sport