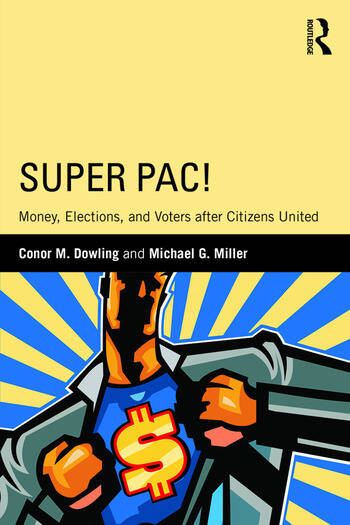 Recent federal court activity has dramatically changed the regulatory environment of campaign finance in the United States. Since 2010, the judiciary has decided that corporations and labor unions may freely spend in American elections, and that so-called "Super PACs" can accept unlimited contributions from private citizens for the purpose of buying election advertising.

This book addresses those questions. Using campaign finance data, election returns, advertising archives, a public opinion survey, and interviews with congressional candidates in the 2012 election, Super PAC! provides unprecedented insight into the behavior of these organizations, and how they affect public opinion and voting behavior.  The first in-depth exploration of the topic, this book will make significant contributions in both political science and applied policy.

Conor M. Dowling is Assistant Professor of Political Science at University of Mississippi.

"This book takes readers beyond the hyperbole. It is an impressive early analysis of some of the ways in which these new organizations are, and are not, changing American politics. Specialists will be returning to the book’s themes for years. They will want to read Dowling and Miller before doing so."

"The rise of Super PACs is a monumental development with wide-ranging implications for the future of American democracy. Yet, until the publication of Super PAC!, very little was known about how Super PACs operate, and the influence that Super PACs have had on public opinion and voting behavior. Conor M. Dowling and Michael G. Miller fill this void by writing what can only be described as a pioneering and must-read book for all who care about campaign finance, organized interests, and U.S. elections. "

"Super PAC! is a first examination into the electoral impact of recent federal court decisions on campaign finance, beginning with Citizens United v. Federal Election Commission. The authors provide a solid foundation for continued scholarly analysis of outside spending in elections, considering the sources of money and how that money is spent, how citizens evaluate information on funding sources, and the races most likely to attract outside funds. The authors provide a clear, thoughtful, and thorough examination, moving past media hype to explore the difficult questions of how and when outside money influences elections. The authors utilize financial data, media records, and experiments in a nuanced exploration of the early impact of these court decisions. This book will primarily be of interest to academics, beginning with advanced undergraduates.