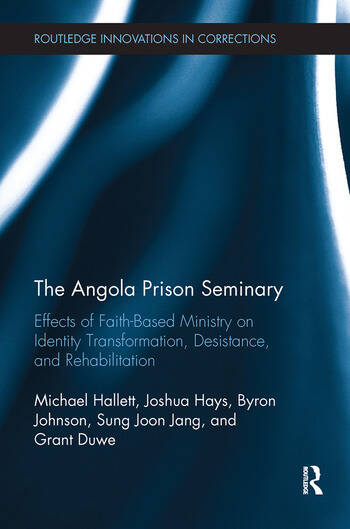 Corrections officials faced with rising populations and shrinking budgets have increasingly welcomed "faith-based" providers offering services at no cost to help meet the needs of inmates. Drawing from three years of on-site research, this book utilizes survey analysis along with life-history interviews of inmates and staff to explore the history, purpose, and functioning of the Inmate Minister program at Louisiana State Penitentiary (aka "Angola"), America’s largest maximum-security prison. This book takes seriously attributions from inmates that faith is helpful for "surviving prison" and explores the implications of religious programming for an American corrections system in crisis, featuring high recidivism, dehumanizing violence, and often draconian punishments.

Michael Hallett is a Professor in the Department of Criminology & Criminal Justice at the University of North Florida.  His work has appeared in numerous books and journals including Punishment & Society, Journal of Offender Rehabilitation, Contemporary Justice Review, Critical Criminology and others. In 2006, Dr. Hallett received the Gandhi, King Ikeda Award from Morehouse College for his book Private Prisons in America: A Critical Race Perspective (University of Illinois Press).  Dr. Hallett received the Outstanding Graduate Alumnus Award from his doctoral alma mater, Arizona State University, in 2007.  He currently also serves as a Senior Research Fellow at Baylor University’s Institute for Studies of Religion. Dr. Hallett has been principal investigator on grants from the US Department of Justice, Florida Department of Juvenile Justice, Jesse Ball DuPont Foundation and several other organizations.

is a Research Fellow at Baylor University’s Institute for Studies of Religion. A graduate of Union University and of Beeson Divinity School at Samford University, he also serves as the co-editor for the proceedings of the Christianity in the Academy Conference.

is Distinguished Professor of the Social Sciences at Baylor University. He is the founding director of the Baylor Institute for Studies of Religion (ISR) as well as director of the Program on Prosocial Behavior.  He is a leading authority on the scientific study of religion, the efficacy of faith-based organizations, and criminal justice.  Recent publications have examined the impact of faith-based programs on recidivism reduction and prisoner reentry. Before joining the faculty at Baylor University, Johnson directed research centers at Vanderbilt University and the University of Pennsylvania. Professor Johnson recently completed a series of studies for the Department of Justice on the role of religion in prosocial youth behavior and has served as a member of the Coordinating Council for Juvenile Justice and Delinquency Prevention (Presidential Appointment).  He has been project director/PI on many grants from private foundations as well as federal agencies including the Department of Justice, Department of Defense, U. S. Institute of Peace, Department of Labor, and the National Institutes of Health.

is Research Professor of Criminology and co-director of the Program on Prosocial Behavior within Baylor’s Institute for Studies of Religion (ISR). Before joining Baylor University, Jang held appointments at Ohio State University and Louisiana State University. His research focuses on the effects of religion and spirituality as well as family, school, and peers on crime and delinquency. His research has been published in social scientific journals in the fields of sociology, criminology, psychology and social work. Dr. Jang is the founding President of the Korean Society of Criminology in America and has been active in many capacities in the American Society of Criminology.

is the Director of Research and Evaluation for the Minnesota Department of Corrections. Dr. Duwe is the author of the book "Mass Murder in the United States: A History" (McFarland and Company, Inc.), and he has written more than 40 articles that have been published in peer-reviewed academic journals such as Criminology,Criminology and Public Policy, Criminal Justice and Behavior, and Sexual Abuse: A Journal of Research and Treatment.  He is the 2014 recipient of the American Society of Criminology’s (Division on Corrections and Sentencing) Practitioner Research Award, and he was the 2013 recipient of the Academy of Criminal Justice Sciences’ Donal MacNamara Outstanding Publication Award for his evaluation of a prison reentry program published in Justice Quarterly.

At once erudite and inspirational, The Angola Prison Seminary shows how faith-based efforts can bring light to the darkest of places. This volume reveals the capacity of prisoners, most serving life sentences, to find meaning, identity, and redemption. Indeed, it impresses upon us that offenders are not the "other" and best treated as forgotten souls. Rather, we learn that by embracing religion and being afforded the opportunity to choose a better self, these Angola inmates transform their lives, come to care about others, and display their admirable humanity on a daily basis. An important lesson, heeded too infrequently in recent times, is thus palpable: corrections "works" when faith, hope, and charity prevail—not rejection, despair, and meanness. This book is a worthy candidate for the status of a contemporary classic and should be standard reading for all serious corrections scholars.

Absolutely do not read this book if you want easy confirmation of what you already "know" about religion in prison. This powerful, evocative study will disrupt any simple narratives and make you reassess your understanding of the world of the prison—a bit like the work that the inmate ministers in Angola have done for fellow prisoners, prison staff, and the wider community for the past few decades. This book does true justice to their amazing stories and so should be widely read and shared.

The results of this fascinating study point to historical and local factors that have resulted in a unique prison seminary and prisoner-led churches at the Angola prison. Yet through careful analyses of survey data and in-depth interviews with inmates and staff, the authors develop more basic themes and insights. Prior research has shown health benefits of religious participation and highlighted that spirituality can be a positive catalyst for change associated with reduced criminal involvement. Yet this work addresses more difficult questions about the process of transformation itself. Nuanced analyses reveal that at the level of the individual, increased knowledge, connectedness and caring/service to others foster new identities and positive meanings that anchor a sense of well-being and make tangible pathways to "a better life." And perhaps most important for its theoretical and policy implications these networks, activities, and positive emotions have created an institutional climate that manages to push back against the dehumanizing conditions that characterize the typical prison environment.

This is an outstanding and vivid study of identity transformation and the search for meaning among prisoners serving life and near-life sentences in America’s largest maximum-security prison, in a state with the highest imprisonment rate. Through the development and support of an "inmate ministry," a whole prison is "morally rehabilitated," in so far as this is possible in the context outlined. The book is meticulously researched and powerfully as well as critically written. Its messages are resoundingly clear. I will be recommending it to students of the prison, colleagues, and especially to prison governors.

Hallett, Hays, Johnson, Jang and Duwe have written an absolutely indispensable book for those interested in the lives and aspirations of those human beings who are living in what can only be described as Dante’s ninth circle of hell—the state penitentiary in Angola, Louisiana, where over 6,000 inmates are confined. Like Virgil, the authors eloquently guide us through this living hell of Angola that was once mired in violence, where about two-thirds of the inmates are serving life sentences, where those not serving a life sentence have been given an average sentence of 92.7 years, and where, as a result, 90 percent of those confined will die within its walls. How is it possible, the reader asks him/herself, for anyone to retain their sanity let alone their humanity in this human bog pile? With detailed information from the inmates themselves, both quantitative and qualitative, the authors show that even in this environment it is possible to gain wisdom, understanding, and even a bit of grace. The book closely investigates Angola’s Inmate Minister Program, where inmates enter a seminary behind bars and become ordained ministers to minister to fellow inmates. There is no hope of "desistance" here, since virtually all of Angola’s residents will never be released, but the Inmate Ministry program is a living illustration to all (inmates and guards) that there is what the authors call an existential dimension of self by which they mean that persons need to have some sense or meaning in their life, no matter what the conditions of that life. The inmate ministers assist others in finding that meaning, thereby providing them with the human grace and dignity they may have thought they lost or perhaps never had. By the end of the book you will be amazed at how such a beautiful thing can grow and prosper in such an ugly, malevolent environment. Not only criminologists should read this wonderful book, but anyone who has lost faith in the kindness and decency of the human spirit.

The Angola Prison Seminary takes us inside the braided logics of exclusion and redemption that run through neoliberalism’s privatized penality.

—Jonathan Simon, Adrian A. Kragen Professor of Law, Faculty Director, Center for the Study of Law and Society, UC Berkeley

This incredibly deep ethnography of the Angola prison seminary program is more than just an exemplar in empirical field studies of prisons. The book is a rare achievement that captures the dignity of those in the darkest of places. Indeed, Hallett and colleagues show through the courage and remarkable grace of these imprisoned men—all of whom will almost certainly die behind bars—how the very government that would just as well have them rot in silence can be confronted without vitriol or polemic. By laying bare the remarkable transformation these men under needlessly brutal circumstances of state sanctioned death by imprisonment, the book is an extraordinary example of prison rights scholarship in the best sense.

, Department of Sociology and Criminal Justice, University of Delaware