The Ophelia Paradox
An Inquiry into the Conduct of Our Lives 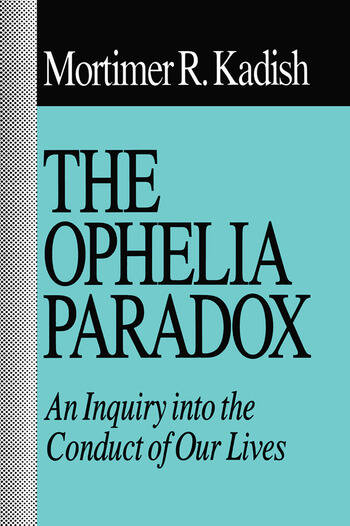 The Ophelia Paradox: An Inquiry into the Conduct of Our Lives

In Shakespeare's Hamlet, when Ophelia tells King Claudius, "Lord, we know what we are, but know not what we may be," she implies more than that we can never know what will happen next, that we have no grounds on which to make significant decisions in the conduct of our lives. She herself had done little or nothing to bring about her present state. Now she is quite mad. Claudius, too, could never have guessed where he would end. Yet the rest of us, although not significantly more knowing than they, profess to think we can actually make Me decisions which genuinely good reasons will support.Experience seems to have convinced us that, deficient in self-knowledge though we may be, sometimes the arrow of decision reaches its mark. Kadish examines how decisions hi the conduct of our lives are possible, how they may be justified, and what the limits of that justification might be for a self that defines itself in a context of social change. Although the need for self-justification tends to be regarded as a weakness, this book suggests that it may also be regarded as the inevitable outcome of the desire to make justifiable decisions, those for which on reflection one can approve oneself.The prime problem of the conduct of life, according to Kadish, is to say when one can and when one cannot justify oneself for one's conduct not to others but to oneself. He proposes that through self judgment individuals develop that very self-interest in virtue of which they endeavor to choose one course of action rather than another. He proposes also that they justify and form themselves through their self-identification as members of communities in conflict and in process of transformation. From this difficult social and human condition the basic problems of ethical and social theory, together with the possibility of a theory of good reasons, are held to arise.In the present time of discontent and emphasis on change hi social, economic, and political life, The Ophelia Paradox has a particular pertinence to the prospects for resolving the basic issues of conduct. It should be of interest to philosophers, sociologists, and psychologists, and of special relevance to anyone concerned with the interrelationships of ethics, art, and law.