The Organic School of the Russian Avant-Garde
Nature's Creative Principles 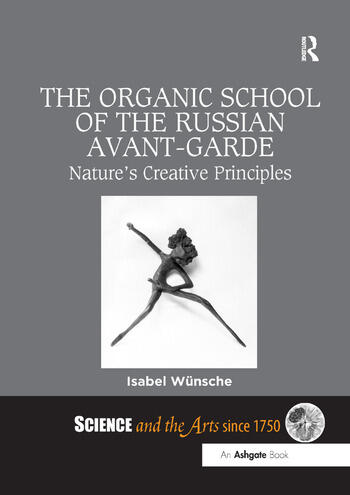 The Organic School of the Russian Avant-Garde: Nature's Creative Principles

The artists of the Organic School of the Russian avant-garde found inspiration as well as a model for artistic growth in the creative principles of nature. Isabel Wünsche analyzes the artistic influences, intellectual foundations, and scientific publications that shaped the formation of these artists, the majority of whom were based in St. Petersburg. Particular emphasis is given to the holistic worldviews and organic approaches prevalent among artists of the pre-revolutionary avant-garde, specifically Jan Ciągliński, Nikolai Kulbin, and Elena Guro, as well as the emergence of the concept of Organic Culture as developed by Mikhail Matiushin, practiced at the State Institute of Artistic Culture, and taught at the reformed Art Academy in the 1920s. Discussions of faktura and creative intuition explore the biocentric approaches that dominated the work of Pavel Filonov, Kazimir Malevich, Voldemar Matvejs, Olga Rozanova, and Vladimir Tatlin. The artistic approaches of the Organic School of the Russian avant-garde were further promoted and developed by Vladimir Sterligov and his followers between 1960 and 1990. The study examines the cultural potential as well as the utopian dimension of the artists’ approaches to creativity and their ambitious visions for the role of art in promoting human psychophysiological development and shaping post-revolutionary culture.

Table of Contents to come.

'Isabel Wünsche's Organic School of the Russian Avant-Garde is a pioneering study - a veritable breath of fresh air in the historiography and criticism of European Modernism. The fruit of meticulous research in Russian and Western archives, this study is a voyage of aesthetic discovery, innovative, lucid and persuasive, and we should be grateful to the author for this fundamental contribution to a more synthetic understanding of early 20th-century Russian culture.'

'In a unique contribution to the history of the Russian artistic avant-garde, Isabel Wünsche has given us a comprehensive and authoritative account of the organic metaphor that characterized many St. Petersburg artists early in the twentieth century. Wünsche chronicles the naturalistic thought and art of major artists such as Kazimir Malevich, Pavel Filonov, Mikhail Matiushin and their followers, as they sought to infuse the biological unity they perceived in the cosmos into their creative work.'

'Isabel Wünsche's much needed and welcome study of the "organic school" of the Russian avant-garde is, primarily, a scholarly investigation of modernist trends in St Petersburg-Leningrad. Her reviewing of the correlations between developments in the natural sciences, philosophy and psychology and, in particular, the art of Mikhail Matiushin and his school, is significant. It makes a considerable contribution to our understanding of the unparalleled brilliance and cutting-edge sensitivities of the radical artists who grew up in the melting pot of the former Russian capital.'

- Jeremy Howard, University of St Andrews, Scotland, author of The Union of Youth: An Artists' Society of the Russian Avant-Garde, East European Art, and co-author of Vladimir Markov and Russian Primitivism

'In her book, Isabel Wünsche provides a systematic overview of what has become known as the “organic school” within the Russian avant-garde. Formed in St. Petersburg in the first and second decades of the twentieth century around a group of artists that included Nikolai Kulbin, Elena Guro, Mikhail Matiushin, and Voldemars Matvejs, it propagated a harmonious view of the world as an organic system, in which the relations between objects could be intuited with the help of the senses. As one of the first publications in English about a phenomenon that has been known in Russia for close to a century, the book is a welcome addition to a reading list of anyone who is interested in the history of the avant-garde and Russian culture in general.'

'Isabel Wünsche’s Organic School of the Russian Avant-Garde ... is a welcome addition to the literature on modern Russian art, not just because she centers on St. Petersburg but also because she explores the oft neglected avant-garde art that was steeped in scientific explorations of the natural world; and it is these lacunae she fills with this important text. Using previously unavailable archival documents Wünsche weaves a deft analysis of the Russian avant-garde Organic School and its leading proponent, Mikhail Matiushin, in a well-researched book with over fifty images, some familiar and some rarely seen by Western audiences.'