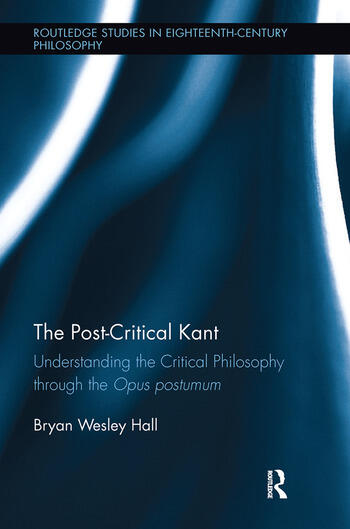 The Post-Critical Kant: Understanding the Critical Philosophy through the Opus Postumum

In this book, Bryan Wesley Hall breaks new ground in Kant scholarship, exploring the gap in Kant’s Critical philosophy in relation to his post-Critical work by turning to Kant’s final, unpublished work, the so-called Opus Postumum. Although Kant considered this project to be the "keystone" of his philosophical efforts, it has been largely neglected by scholars. Hall argues that only by understanding the Opus Postumum can we fully comprehend both Kant’s mature view as well as his Critical project.

In letters from 1798, Kant claims to have discovered a "gap" in the Critical philosophy that requires effecting a "transition from the metaphysical foundations of natural science to physics"; unfortunately, Kant does not make clear exactly what this gap is or how the transition is supposed to fill the gap. To resolve these issues, Hall draws on the Opus Postumum, arguing that Kant’s transition project can solve certain perennial problems with the Critical philosophy. This volume provides a powerful alternative to all current interpretations of the Opus Postumum, arguing that Kant’s transition project is best seen as the post-Critical culmination of his Critical philosophy. Hall carefully examines the deep connections between the Opus Postumum and the view Kant develops in the Critique of Pure Reason, to suggest that properly understanding the post-Critical Kant will significantly revise our view of Kant’s Critical period.

Introduction 1. A Dilemma for Kant’s Theory of Substance 2. The Development of Kant’s Ether Theory 3. Kant’s Ether Deduction 4. Kant’s Transition Project in Convoluts 10-11 5. Kant and the Problem of Affection  Conclusion

"The interpretive principles and the results of his work will be influential in research on Kant's last drafts for years to come." –Veit Justus Rollmann, Notre Dame Philosophical Review

"In this book Bryan Hall has followed up his articles on Kant's post-Critical writings to focus on the familiar puzzle of a supposed 'gap' in the Critical work, which the Opus Postumum was designed to bridge. His book promises to throw real light on Kant's later work and its controversial relation to the earlier Critiques."—Graham Bird, Emeritus Professor of Philosophy, Manchester University, UK

"After the publication of the B edition of the Critique of Pure Reason in 1787, Kant gradually came to the realization that there is a fundamental "gap" in his explanation of transcendental idealism; and in his final unfinished "Transition" project of the late 1790s and early 1800s, now known as the Opus postumum, he tried desperately to close this gap. Bryan Hall’s The Post-Critical Kant explores this profound problem in Kant’s metaphysics and epistemology in a highly thoroughgoing, incisive, and compelling way that will at the very least significantly inflect, and perhaps even drastically change, our conception of the Critical philosophy itself." –Robert A. Hanna, Professor of Philosophy, University of Colorado, USA

"A great new challenge in interpreting the still enigmatic aim of Kant’s Opus postumum in line with the Critique of Pure Reason, attempting to solve its "problems" in the Analogies of Experience." –Ernst-Otto Onnasch, Assistant Professor of Philosophy, Utrecht University, Netherlands

"Hall’s study offers a very clear, rigorous, stimulating and original attempt to reconstruct the systematic continuity between Kant’s critical and post-critical philosophy, rightly emphasizing the central meaning of the a priori concept of the ether in OP." –Giovanni Pietro Basile, Journal of the History of Philosophy