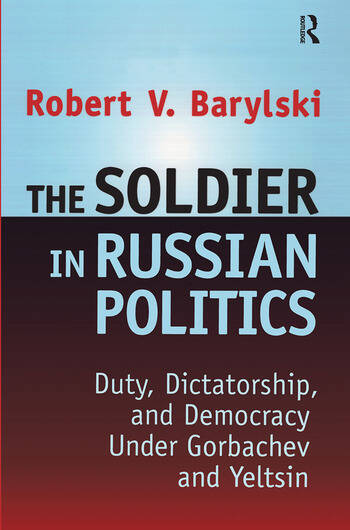 If Russia is to become a viable democracy, it will need a viable state to make and enforce decisions that nurture societal cohesion and sustain complex economic activity. Armed forces are essential attributes of viable modern states, but what happens when states undergo major structural changes? What was the military's contribution to the end of the Soviet Union and the rise of post-Soviet Russia?

The Soldier in Russian Politics is the first study to go beyond familiar accounts of the main events that brought down the Soviet state and began its reconstruction. It captures the interplay between soldier and civilian politicians in a major political history based on solid political-sociological analysis. Barylski uses the study of civil-military relations to explore new political and intellectual conditions and explain the historic relationship between changes in Western models of Russian reality and political change in the former Soviet Union.

Examining the military's participation in every major, twentieth-century, political change from 1917 to 1991, Barylski demonstrates that every deep political transformation in Russia has military dimensions. Barylski discusses how the Russian presidency's power to command and control the military without legislative checks and balances led to armed conflict with Parliament in October 1993 and to the Chechen war of 1994-1996, and is unhealthy for long term democratic development. Barylski analyzes ministers of defense Yazov, Shaposhnikov, Grachev, and Rodionov as political actors, traces the careers of ambitious political soldiers such as Aleksandr Lebed and Aleksandr Rutskoi, and describes the military's growing political alienation from the Yeltsin administration. His final chapters cover the presidential elections, the short-lived Yeltsin-Lebed political alliance, the tensions associated with Yeltsin's ailments, and Yeltsin's efforts to rebuild his personal power political effectiveness.

The Soldier in Russian Politics presents political history in an incisive and objective manner. It applauds the progressive officers, soldiers, and politicians where decisions minimized bloodshed and prevented civil war. But it also warns that civilian and military leaders can make mistakes which cause political institutional failure, violence, and dictatorship. This book will interest political scientists, political sociologists, students of Russian and soviet politics, and all military historians and professionals.