The Spectre of a Westphalian Europe? 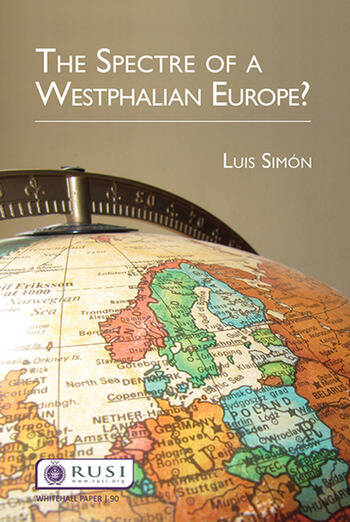 The Spectre of a Westphalian Europe?

This Whitehall Paper contends that Europe is undergoing a balance of power crisis set in motion by three structural developments: US retrenchment in Europe; Germany’s emerging leadership position within the EU; and Russia’s push to recreate a sphere of influence in Eastern Europe. It analyses what these changes mean for Europe’s geopolitics, and the role that the UK and France can play in stabilising the regional order.

I Balance and Order in Europe

Europe’s Framers: Britain, the US and the Changing of the Guard

The Role of Institutions in Managing the European Balance

The End of the Cold War: Whither the European Balance?

Perspectives on the European Balance

Back to Square One? Europe and the Looming Shadow of US Retrenchment

II Legitimacy and Order: The US, Germany and Russia

Germany as a Reluctant Leader: Weakness in Strength

How to Restore the European Balance

Germany, Russia and the Space Between

Luis Simón is a Research Professor of International Security at the Institute for European Studies of the Vrije Universiteit Brussel (VUB) and Director of the Brussels Office of the Elcano Royal Institute. He is also an associate fellow at RUSI and the Baltic Defence College, and a member of the editorial board of Parameters: The US Army War College Quarterly. Professor Simón has been a visiting research and fellow at the Saltzman Institute of War and Peace Studies at Columbia University (2012–13), RUSI (2009–10), the Center for Transatlantic Relations at the Paul H Nitze School of Advanced International Studies, Johns Hopkins University (2008), and the Fondation pour la recherche stratégique (2008). In 2008–09, he was a fellow of the European Foreign and Security Policy Studies Programme of the VolkswagenStiftung, Germany, the Compagnia di San Paolo, Turin, and the Riksbankens Jubileumsfond, Stockholm. He holds degrees from Royal Holloway College (University of London) and the Institut d’études politiques de Paris (Sciences Po). He is the author of Geopolitical Change, Grand Strategy and European Security: The EU-NATO Conundrum in Perspective (Palgrave Macmillan, 2014). His articles have appeared in leading journals such as Security Studies, International Affairs, Journal of Strategic Studies, Survival, Geopolitics, Orbis, Parameters: The US Army War College Quarterly, RUSI Journal, Comparative Strategy, and International Spectator.