The Sports Playbook
Building Teams that Outperform, Year after Year 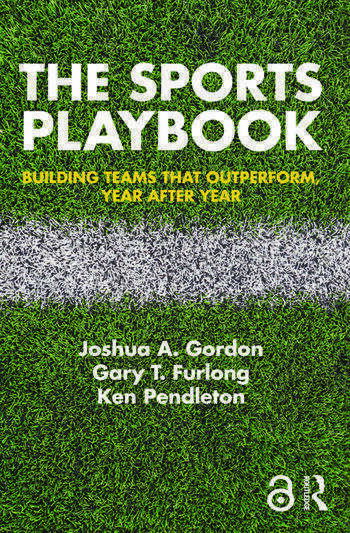 The Sports Playbook: Building Teams that Outperform, Year after Year

Why do so many sports teams have losing records, year after year? Why do others win big, but only every 20 or 30 years? And why is it that so few teams enjoy sustained, continual success? This book gives the answer. Providing a blueprint or "playbook" for success in sports at every level, it lays out a clear step-by-step plan for building a team culture that will lead to winning consistently.

With each step, the book introduces real-world tools that can be easily implemented by every sports organization and coach to achieve success, including team charters, individual athlete plans, player accountability systems, and team communication strategies. It offers expert advice and practical guidance on key areas, such as aligning individuals with a clear team plan, resolving conflicts proactively, and learning from every game and every season to develop a smarter and more consistent culture of success.

The Sports Playbook: Building Teams that Outperform, Year after Year

will help every team fulfil its true potential through leadership, focus, and performance. It is essential reading for coaches, sport management professionals, and leaders of every kind of team, inside and outside of sports.

1. The Cost of Failure in Sports

7. The Sports Playbook in Summary

Joshua A. Gordon has been a leading business and legal strategist for more than 25 years, and is an experienced educator, consultant, negotiator, facilitator, and organizational capability builder. He specializes in sports industry strategy and crisis management that builds upon a deep history of contexts that have included business-to-business, organizational change, energy, environmental, real estate and housing, family, and gang-related challenges. Gordon teaches sports business and sports law at the University of Oregon Lundquist College of Business and is the founder and lead practitioner at the Sports Conflict Institute (SCI), which supports competitive goals in athletics through understanding, preventing, and resolving destructive conflict inside and outside the lines and specializes in building high performing team culture. Gordon has developed creative organizational solutions to ensure competitive success for a number of teams and leagues from collegiate through the professional levels. He has presented to audiences that have included individuals and teams from the NCAA, NBA, NFL, MLS, NRL, MLB, USATF, USTA, PGA, LPGA, and ATP. Gordon earned his Juris Doctor from Suffolk University Law School, his Master's in Dispute Resolution from the University of Massachusetts Boston, and his Bachelor's degree in Psychology and Sociology from the University of Massachusetts Amherst.

Gary T. Furlong has extensive experience in mediation, alternative dispute resolution (ADR), organizational facilitation, team-building, and conflict resolution. He is past president of the ADR Institute of Ontario, is a Chartered Mediator and holds his Master of Laws (ADR) from Osgoode Hall Law School. Gary is the author of The Conflict Resolution Toolbox, and was awarded the McGowan Award of Excellence in ADR in 2005 by the ADR Institute of Canada. He has worked with many organizations to create alignment and focus in mission-critical team-based environments, in business and commercial settings as well as sports organizations. Gary has also conducted original research into the relationship between team performance and dispute resolution processes, and has conducted hundreds of interventions to help teams and organizations build focused and effective cultures that breed success. He is a board member with the Sports Conflict Institute, teaches at the Queen’s University Industrial Relations Center and the Osgoode Hall Law School LLM program, and is a leader in the mediation and alternative dispute resolution field in Canada and North America.

Ken Pendleton earned a PhD in Philosophy from the University of Oregon, having written his dissertation on how standards of reasonableness are applied to hostile environment sexual harassment cases. After teaching courses about reasoning and writing, ethics, and social and political theory at Oregon State University for more than a decade, he changed his professional focus to his lifelong passion, sports. He conducted research, assisted with program development, and taught highly successful courses on sports and cultural studies at the Competition Not Conflict program at the University of Oregon. In general terms, the purpose of his teaching and research was to show how the line between healthy competition, on the one hand, and destructive conflict, on the other, is reshaped by class, race, nationality, gender, and other factors, such as commercialism. Ken and Joshua Gordon work together at Sports Conflict Institute, which focuses on projects that help stakeholders understand, resolve, and prevent institutional problems that arise at all level of sports. He has also consulted with London-based Football Marketing and Management International (FMMI) since 2006. His work with FMMI centered around his encyclopaedic knowledge of both the major American sports and international soccer, including doing deep background research on a ground-breaking comprehensive study on the North American soccer landscape, Soccer in North America: The Commercial Opportunities.

"Building and maintaining a championship culture is foundational to sustained excellence. Organizational culture must be a strategic initiative that is reinforced daily. The Sports Playbook provides the roadmap to creating the culture you desire" - Rob Mullens, University of Oregon Athletic Director

"When your culture leads to your best player being your hardest worker then you truly have something special. That doesn’t happen by accident. It happens because you follow the process outlined in this book!"

"The Playbook is a fascinating look at the structures and strategies that produce consistent success. By using real-world examples to bring their concepts to life, Gordon, Furlong and Pendleton have developed an incredible resource for any organization that's serious about optimizing their performance." - Ian Dobson, 2008 US Olympian and High Performance Running Coach

"Every leader – whether in sports, business or at home – strives for consistent success. With The Sports Playbook, Gordon, Furlong, and Pendleton have taken the lessons learned from the most successful teams and leaders, and created an easy-to-follow blueprint. I wish this book had been written years ago." - Frances Traisman, Vice President of Sales, Seattle Mariners

"A culture of success is what permeates throughout winning organizations and Gordon, Furlong, and Pendleton hit the mark with this book. Every major league organization is trying to build and cultivate this culture of success, leading to consistent results year in and year out. I’ve been fortunate from 20 years of working with the Atlanta Braves, Cleveland Indians and the Pittsburgh Pirates to see great examples of how strong leadership can develop, transform and shape an organization’s culture, hereby creating buy-in among front office staff, coaches and players." - Tyrone Brooks, Senior Director, Front Office and Field Staff Diversity Pipeline Program, Office of the Commissioner of Baseball, Major League Baseball

"To me, culture is everything. Culture is bigger than the individual, greater than the team, and more important than a single performance. It is what attracts the right players to our program. Culture sets the foundation and provides the opportunity for sustained success. Gordon, Furlong, and Pendleton have a deep understanding of how teams and organizations become and remain successful. The Sports Playbook clearly outlines what’s necessary to sustain the championship culture that every coach desires."

"Few books are written which give you the "how to" about working with people effectively in the sporting environment. Sport is unique to every other environment. We are aspiring to not just strike success once, but to create sustained high performance despite changes in personnel and in conditions which are never the same. This book gives you more than just great stories and metaphors. As a multiple Olympic Medalist, Coach and someone who works in elite sport, I highly recommend this book to any coach who wants to gain a competitive advantage which cannot be copied by their competitors." - Bo Hanson, 4x Olympian, 3x Olympic Medalist, Performance Consultant at Athlete Assessments

"A strong culture is a source of sustainable competitive advantage. It is a controllable, and can be created; Gordon, Furlong, and Pendleton have built a compelling roadmap for doing so that is easily implemented by any team – athletic, business, or otherwise."

"What can the business world learn from some of the most successful sports teams in history? Taking a deep dive into the into the inner workings of these high-functioning organizations, the authors’ research allows readers to come away with insights and actionable practices with real world applicability. This Playbook gives leaders in all walks of life the tools necessary to create a championship culture within their own teams."

"As a sports lawyer who represents athletes, I see firsthand the importance of team culture and how it affects players one way or the other. A positive winning team culture leads to better decision-making by players who understand that "doing the right thing" is expected. A negative losing team culture leads to worse decision-making by players who do the "wrong thing" leading the team into disarray. The difference between athletes who win both on the field and in life and those who lose is often what surrounds them. The Sports Playbook provides a blueprint for how to create a positive winning sports organization and team culture."