The Strong and the Weak in Japanese Literature
Discrimination, Egalitarianism, Nationalism 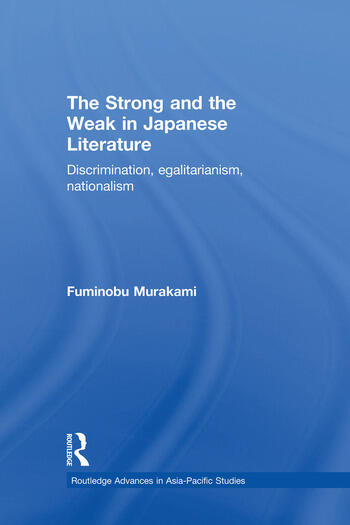 The Strong and the Weak in Japanese Literature: Discrimination, Egalitarianism, Nationalism

This book uses texts from classical to modern Japanese literature to examine concepts of 'respect for the strong', as a notion of an evolutionary society, and 'sympathy for the weak', as a notion of a non-violent and changeless egalitarian society.

The term strong refers not just to those with strength and power. It also includes other ideal attributes such as beauty, youth and goodness. Similarly, the term weak implies not only the weak and infirm, but also the disadvantaged, the indecent, the unsophisticated and those generally shunned by society. The former are associated not only with the power of life, competition, evolution, progress, development, ability, effectiveness, efficiency, individuality, the future, hope and romance, but also with violence, fighting, bullying, discrimination and sacrifice. The latter, in contrast, invoke notions of peace, egalitarianism, anti-discrimination and welfare, as well as stagnation, retreat, retrogression, degeneration and the decline of vital powers.

By using these two concepts Murakami skillfully weaves a narrative that is part literary criticism, part social commentary. As such the book will be of huge interest to not only scholars and students of Japanese literature, but also those of Japanese society and culture.

1. Introduction  2. The Strong and the Weak in Japanese Religious, Philosophical and Political Writings  3. Ugly Ladies in The Tale of Genji  4. Women, Humble Men and Insulted People in The Tale of the Heike  5. Sacrifice and Revenge, Love and War, and a World Without Violence in The Eight Dog Chronicles  6. Dancing Girl, Geisha, Mistress and Wife in Kawabata Yasunari’s Stories: The Dancing Girl of Izu, Snow Country, Thousand Cranes and The Sound of the Mountain  7. Conclusion

Fuminobu Murakami is Associate Professor at the Department of Japanese Studies, University of Hong Kong. He is author of Postmodern, Feminist and Postcolonial Currents in Contemporary Japanese Culture (Routledge, 2005), and co-editor of Reading The Tale of Genji (Global Oriental, 2009).