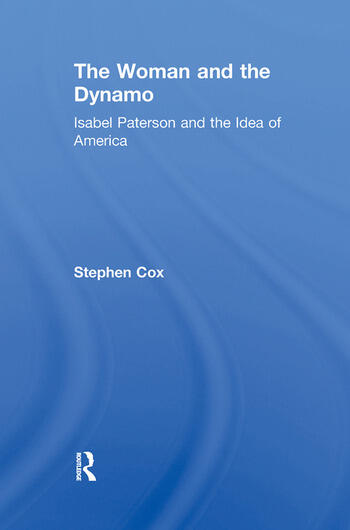 The Woman and the Dynamo: Isabel Paterson and the Idea of America

Novelist, columnist, cultural critic, political theorist-- Isabel Paterson was one of the most extraordinary personalities of the 1930s, renowned for her incisive wit and her unique interpretation of the American experience. The Woman and the Dynamo is the first biography of a woman who has long been a source of rumor and legend. From interviews, private papers, and her millions of published words, Stephen Cox weaves a narrative that brings Paterson vividly to life.

A radical individualist in both theory and practice, Paterson spent her early life on the Western frontier, "lavished" two years on formal education, set a record for high-altitude flight, became a journalist by "accident," and made herself a fearless chronicler and conscience of New York literary life. At the same time, she made a permanent contribution to American political thought.

Paterson identified the fundamental issues at stake in the crises of the twentieth century and responded with an original theory of history and political economy. In her view, the individual mind is the dynamo of history, working through the "long circuit" of institutions that maintain and enhance individual liberty; and America is the place where the advanced forms of those institutions were invented and are currently undergoing their severest trial. While other intellectuals derided the American ideal of progress and called for the restraint or abolition of the capitalist system, Paterson demanded a scrupulous application of the "engineering principles" on which American civilization had been built.

The Woman and the Dynamo provides one of the few broad and detailed accounts of the origins of the American political Right, emphasizing the special role that women and imaginative writers played in its creation, and posing new questions about what it means to be "left" or "right," "liberal" or "conservative" in America. This will be compelling reading for those interested in twentieth century intellectual history, literature, and politics.