Towards a Rhetoric of Medical Law 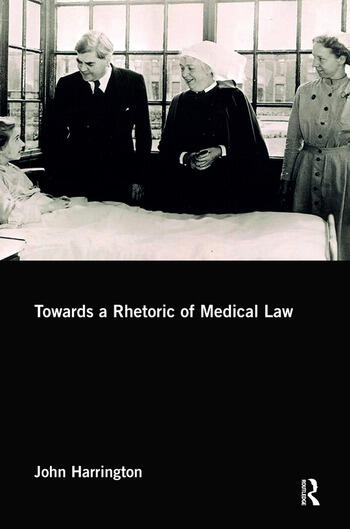 Towards a Rhetoric of Medical Law

Challenging the dominant account of medical law as normatively and conceptually subordinate to medical or bioethics, this book provides an innovative account of medical law as a rhetorical practice. The aspiration to provide a firm grounding for medical law in ethical principle has not yet been realized. Rather, legal doctrine is marked, if anything, by increasingly evident contradiction and indeterminacy that are symptomatic of the inherently contingent nature of legal argumentation. Against the idea of a timeless, placeless ethics as the master discipline for medical law, this book demonstrates how judicial and academic reasoning seek to manage this contingency, through the deployment of rhetorical strategies, persuasive to concrete audiences within specific historical, cultural and political contexts. Informed by social and legal theory, cultural history and literary criticism, John Harrington’s careful reading of key judicial decisions, legislative proposals and academic interventions offers an original, and significant, understanding of medical law.

'In an interdisciplinary tour de force, Harrington uses rhetorical analysis to shed new light on debates in medical ethics and law, while also showing how the changing political economy of health care shapes the field. This book will be of interest to scholars of law and ethics and also social scientists working on the sociology and politics of medicine.'

'Harrington’s work is always stimulating and original. This book sets a new agenda for understanding medical law as rhetoric. Lucidly written and intellectually sophisticated it brings excitement and pleasure to the study of medical law and deserves the widest readership.'

‘Harrington’s insights into the workings of medical law are perceptive, original, and stimulating. He addresses questions that many have overlooked, from perspectives that are unfamiliar. The results are novel, rich and illuminating. His is a very significant contribution to medical law scholarship.’

'With a deft and sophisticated approach, John Harrington has shaken up medical law jurisprudence. He challenges both legal doctrinalists and legal theorists for their failure to grasp what it means to take medical law seriously as a rhetorical practice.  Moving seamlessly between theory and practice, he highlights the inescapable contingency and contextualisation of medical law in its efforts to develop and instantiate a convincing ethic of medical care – it is an intellectual and juristic tour de force.'

'This is an impressive book, and its significance is by no means limited to medical law...What is perhaps most impressive is that, in amongst all the general theory of how rhetoric matters, Harrington never loses sight of the legal detail. Indeed, the point of the analytical frame is to offer us a different way into that detail, and especially a way in that also offers a way of looking out, ie of connecting law to its various contexts.'