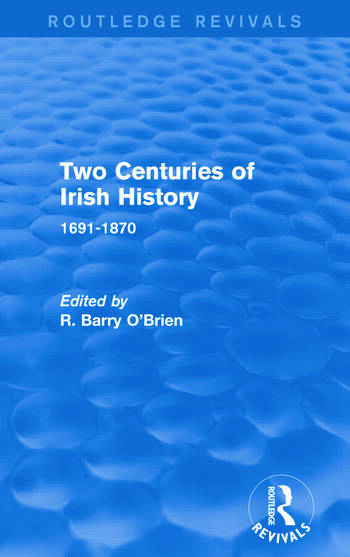 This collection of papers, first published in 1888, presents the history of Ireland as it unfolded from the Treaty of Limerick in 1691 until the Land Act of 1870 and the Home Rule Movement. Written at a time of great national interest in the ‘Irish Problem’, Two Centuries of Irish History tells the story of Ireland’s troubled relationship with successive British governments since the reign of William III, and charts the development of bitterness between opposing factions within Ireland itself. Whilst not lacking scholarly rigour, each contribution is lucidly written and accessible to the interested reader.

Editor’s Note; Introduction The Right Hon. James Bryce Part I W.K. Sullivan 1. The Treaty of Limerick; the Last Confiscation; and the First Parliament 2. Violation of the Treaty of Limerick – Inauguration of Repressive Legislation 3. Period of the Penal Laws 4. Period of Desolation; Government of Ireland by an English Administration and a Parliament and Magistracy of Colonial Landlords 5. Period of Corruption; Dawn of Civil and Religious Freedom 6. Rise and Growth of Movements for Freedom of Trade, Freedom of Religion, and Freedom of Legislation Part II George Sigerson 1. Effect of Concession – Work of an Independent Parliament 2. The Commercial Question – Progress of Irish Manufactures – Commercial Proposals Accepted – Ministerial Disloyalty to the Irish Constitution 3. The Regency Question 4. The Franchise Act of 1793 5. The Olive Branch – Lord Fitzwilliam 6. Evolution of Rebellion 7. Last Sessions of Parliament – The Union Part III J.H. Bridges 1. Social Condition of Ireland at the Beginning of the Century 2. From the Union to the Death of Grattan 3. The Catholic Association Part IV Lord Fitzmaurice and James R. Thursfield 1. Reform and its Consequences 2. The Peel Interregnum and the Melbourne Regime 3. The Second Administration of Peel 4. The Famine and its Consequences Part V G. P. MacDonell 1. The Encumbered Estates Act – The Tenant-Right League 2. The Tenant-Right League – The Irish Church Missions – The Napier Land Bills 3. Refusal of Redress 4. Fenianism 5. Disestablishment 6. The Land Question 7. The Land Act of 1870, and the Home Rule Movement 8. Conclusion; Index