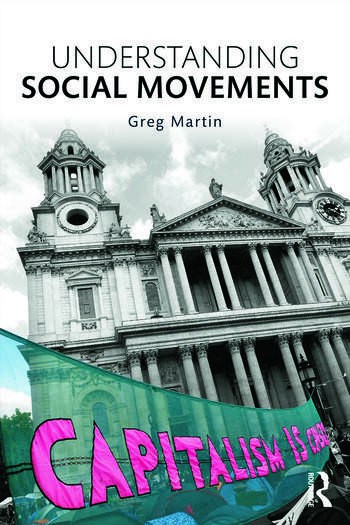 This book offers a new and fresh approach to understanding social movements. It provides interdisciplinary perspectives on social and cultural protest and contentious politics. It considers major theories and concepts, which are presented in an accessible and engaging format. Historical and contemporary case studies and examples from a variety of different countries are provided throughout, including the American civil rights movement, Greenpeace, Pussy Riot, indigenous peoples movements, liberation theology, Occupy, Tea Party, and the Arab Spring.

The book presents specific chapters outlining the early origins of social movement studies, and more recent theoretical and conceptual developments. It considers key ideas from resource mobilization theory, the political process model, and new social movement approaches. It provides an expansive commentary on the role of culture in social protest, and looks at substantive areas in chapters dedicated to religious movements, geography and struggles over space, media and movements, and global activism.

Understanding Social Movements will be a useful resource for undergraduate and postgraduate students across disciplines wanting to be introduced to or extend their knowledge of the field. The book will also prove invaluable for lecturers and academic researchers interested in studying social movements.

Greg Martin is a Senior Lecturer in the Department of Sociology and Social Policy at the University of Sydney, Australia. He has published on social welfare movements, subcultures and social movements, protest policing, and new social movement theory. His other research interests are in criminology and socio-legal studies, and he is co-editor of the book, Secrecy, Law and Society (Routledge, 2015). He is a member of the Editorial Advisory Board for the journal, Social Movement Studies, and is an Associate Editor of Crime Media Culture.

Greg Martin leads the reader ably from the origins of social-movement scholarship in crowd theory, right through to the most interesting concerns today: globalization, the media, the geography of protest, emotions, narratives, and more. His integration of religious movements into how we study other social movements is especially welcome.- James M. Jasper, teaches sociology at the Graduate Center of the City University of New York

This book is packed with interesting examples, from the role of black churches in the US civil rights movement, to Pussy Riot - from the Zapatistas to the Comfort Women that really bring concepts and theories to life. It is clearly written and will really help students understand what is at stake in social movement studies, dealing as it does, not just with well-developed themes such as resource mobilisation and culture, but also new topics including emotions, media and space. - Professor Kate Nash, Department of Sociology, Goldsmiths, London

Understanding Social Movements offers an unusually comprehensive approach to the processes that ordinary people undergo, as they try to remake the worlds they live in. It starts with the foundations and takes us through the prospects for meaningful change in the future. The book is an asset for students and a challenge for citizens. - David S. Meyer, Professor of Sociology, University of California, Irvine, USA

There are only a handful of textbooks in social movements. This engagingly written book is unique in its interdisciplinarity, its comprehensive treatment of both American and European theories and its inclusion of movements in the global South, Europe and the Middle East, along with recent U.S. social movements, including the global justice, Occupy, and Tea Party movements.- Verta Taylor, Professor of Sociology, University of California, Santa Barbara, USA

Often proclaimed dead, coopted, institutionalized - in the new millennium social movements have been instead confirmed as a driving force of change in our societies. In this deep and broad assessment of social movement studies, their contributions and pitfalls, Greg Martin provides us with a rich tool kit of concepts and theories that will help us read contentious politics in the past, the present and the future. - Donatella della Porta, Director of Center on Social Movement Studies-Cosmos, European University Institute, Italy

In his new book, Greg Martin provides a concise yet comprehensive introduction to social movements. The numerous illustrations from outside Europe and North America, and the attention to cultural and symbolic challenges alongside more political ones, represent a distinctive feature of this interesting and useful volume.

A lively and engaging book which makes great use of examples and illustrations to bring social movement theory to life and which, having provided a solid grounding in the basics,draws upon cultural and media theory to develop and dialogue with the cutting edge. - Nick Crossley, Professor of Sociology, Sociology and
Mitchell Centre for Social Network Analysis, University of Manchester, UK