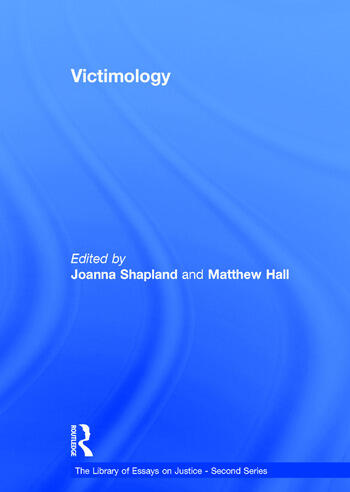 Interest in victims of crime - victimology - has always spanned both the scholarly and practical realms. This volume combines a collection of essays covering the diversity of approaches towards victimology, from the conceptual to the practical, including evaluation and scrutiny of the basis on which we do justice. The volume is divided into four sections; the first part discusses the nature of victimisation and concepts of the nature of victimhood; the second part looks at the effects of victimisation and some of the ways in which victim support and assistance have developed, and the views of victims on these. The third part considers the role that victims play in criminal justice and their reactions to those roles. Finally, the book looks at responses to victimisation - including attempts to provide acknowledgement, reparation and compensation - within the framework of criminal justice. Much of the research literature on victimology has previously stemmed from Europe and North America, and has been influenced by an Anglo-American common law legal system and views of criminal justice whereas this collection incorporates different legal systems’ perspectives, particularly those of mainland Europe. This book will serve as an important predicate to wider research in victimology and further development of this dynamic field.

Contents: Introduction. Part I Victimization: The ideal victim, Nils Christie; Metaphors of loss: murder, bereavement, gender, and presentation of the 'victimized' self, J. Scott Kenney; The International Crime Victims Surveys: a retrospective, John van Kesteren, Jan van Dijk and Pat Mayhew; The victimisation of young people, Simon Anderson, Richard Kinsey, Ian Loader and Connie Smith; Repeat victimisation: taking stock, Ken Pease. Part II Supporting Victims of Crime: The impact of burglary upon victims, Mike Maguire; What do we know about the effects of crime on victims?, Joanna Shapland and Matthew Hall; Crime victims’ well being and fear in a prospective and longitudinal study - results and discussion, Adriaan J.M. Denkers and Frans Willem Winkel; The value and limitations of victim support schemes, Claire Corbett and Mike Maguire; Provision for victims in an international context, Mike Maguire and Joanna Shapland; Meeting needs: the victim support contribution and victim reactions, Mike Maguire and Jocelyn Kynch; Support and Willingness to engage with the CJS, Ramona Franklyn. Part III Victims in the Criminal Justice System: At court, Joanna Shapland, Jon Willmore and Peter Duff; Justice for all: putting victims at the heart of criminal justice?, John D. Jackson; The treatment of victims in England and Wales, Paul Rock; An ambiguous participant: the crime victim and criminal justice decision-making, Ian Edwards; Prosecuting domestic assault: victims failing courts, or courts failing victims?, Antonia Cretney and Gwynn Davis; Cross-examination in rape trials, Louise Ellison; Who’s afraid of the big bad victim? Victim impact statements as victim empowerment and enhancement of justice, Edna Erez; Victim impact statements: can work, do work (for those who bother to make them), James Chalmers, Peter Duff and Fiona Leverick. Part IV Ameliorating Outcomes: Victims, the criminal justice system and compensation, Joanna Shapland; Compensation and conceptions of victims of crime, David R. Miers; The politics of victim compensation, Robert Elias; From absence to presence, from silence to voice: victims in international and transitional justice since the Nuremberg trials, Susanne Karstedt; The International Criminal Court and its trust fund are coming of age: towards a process approach for the reparation of victims, Heidy Rombouts and Stephan Parmentier; Victims and the International Criminal Court (ICC): evaluating the success of the ICC with respect to victims, Jo-Anne Wemmers. Name Index.