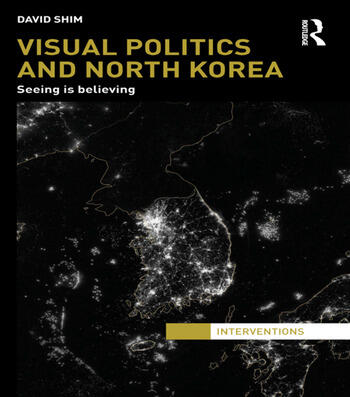 In the realm of international relations, there are seemingly few states like North Korea. Whether it is the country’s human rights situation, its precarious everyday life or its so-called foreign policy of coercion and nuclear brinkmanship, no matter what this ‘pariah’ nation says and does it affects the state and stability of regional and global politics. But what do we know about North Korea and how do we come to know it? This book argues that visual imagery plays a decisive role in this operation. By discussing two exemplary areas – everyday photography and satellite imagery – the book takes into account the role of images in the way that particular issues related to North Korea are understood in contemporary geopolitics. Images work. They do something by evoking a particular perspective of what is shown in them, allowing only specific ways of seeing and knowing. In this sense, images are deeply political. Individual methodological usages in the book can provide a procedural basis from which to start or rethink further studies on visuality, both in IR and beyond. It also opens an innovative path for future studies on East Asia, making the book attractive to a range of specialists and thus holding an appeal beyond the boundaries of a single discipline.

David Shim’s book Visual Politics and North Korea is a timely and welcome intervention in the fields of International Relations, Asian Studies and Visual Culture. By taking the politics of seeing seriously, Shim reveals how North Korea’s geopolitical status as a pariah state has been visually figured, secured and reproduced. What makes this book particularly innovative is its attention to contrasting scales of visuality as Shim juxtaposes the practices of everyday photography with the asymmetries produced by satellite imagery. While Shim’s focus is on the case of North Korea, the book provides wide-ranging insights about the relationship between visuality and global politics. In that sense, Visual Politics and North Korea will be invaluable for critical scholars exploring the multiple intersections of seeing, knowing, globalization and power.

Disciplinary differences notwithstanding, Shim has offered a nuanced, challenging and timely work on the visual politics of North Korea. In a way, the title does not do justice to the work being done the book is more about the visual politics of how the world (particularly, the United States) imagines North Korea. That is, these visual representations say much more about our desires and our ideological conditioning than it says about North Korea's desires or ideological conditioning. Thus, this book is essential reading for anyone interested in the politics of visual culture, for those in the field of Critical International Relations, and for anyone interested in North Korea's place in the world.

The real value that Shim brings here is the discussion of techniques and ways in which staging take place, both in front of the camera and behind it. Shimâ€™s final conclusion is the most important element of the book: â€œvisual representations clearly address powerâ€ and this book is a useful companion piece when considering asymmetrical information and whose agenda one representation or another supports or weakens.

For anyone interested in Korean affairs, and especially those who are planning a visit to the DPRK in the next future, this is definitely a recommended reading.