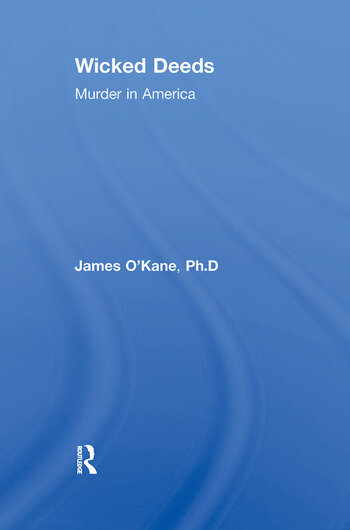 To most Americans, homicide appears to be a random act, one committed by a deranged and irrational killer in a haphazard, unpredictable manner. Murder is seen as a chaotic, disorganized act beyond the realm of reason. In Wicked Deeds, James O'Kane shows that homicide is actually rather predictable, and patterned with respect to its assailants and victims, the circumstances in which it takes place, the time and location where it occurs, and the motives which precipitate the murderous act. Engagingly written and solidly grounded in evidence, this is a definitive study of murder in the United States.

O'Kane explores the phenomena of homicide, illustrating the journalists' "who, what, why, when, and where" of murder. He differentiates criminal homicide, such as murder in the first and second degree, from other types of killings, including legal and quasi-legal killings. These include suicide, abortion, accidental death, terrorism, and other non-criminal types of homicide, such as justifiable and excusable homicide. The author's focus is criminal homicide, and he uses age, sex, race, and socioeconomic status, as well as demographic data to explain ever-recurring patterns of murder in the United States.

Wicked Deeds analyzes numerous categories of murder: intimate partner homicide, child and family murders, multiple victim killings, including mass murder and serial homicide. Each type of murder is illustrated by accounts of actual murders reported in the media and on internet sites. Approximately 200 cases illustrate the typical homicides as well as the bizarre ones.

In portraying the patterns and regularities of murder in the United States, Wicked Deeds is an essential treatment of a subject too often given over to sensationalism. It will be of keen interest to professionals and students of criminal justice, as well as those interested in American culture and the general reader who wants to grasp the patterns underlying the headlines.