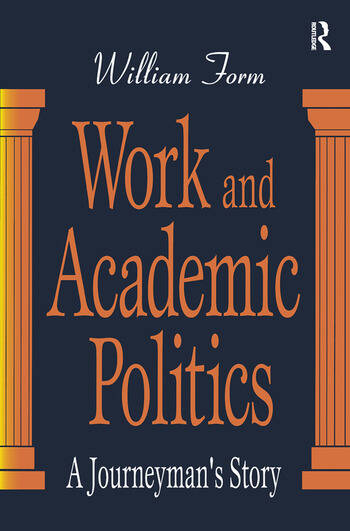 Over the course of a long and distinguished academic career William Form has gained renown as a major scholar in the areas of American labor politics, institutional analysis, and educational issues surrounding the experience of ethnicity and assimilation. Much of his scholarly work derived from his own experience as the son of Italian immigrants in the early twentieth century seeking integration into the mainstream of American society. As with other American ethnic groups the entrance into elementary, secondary and higher education involved sacrifice and gain. Moreover, the period of Form's academic career saw momentous changes in study of the social sciences. In Work and Academic Politics: A Journeyman's Story, Form reflects on his own experience to provide an exemplary intellectual autobiography against the background of modernity and change in America.

Form likens his career to phases of the medieval guild system. His pre-apprenticeship began with his early ethnic experiences in Rochester, New York, where he grew up and in its school system which ignored ethnic backgrounds and turned second generation children into Americans who spoke only English. After his apprenticeship at a newly established graduate program at the University of Maryland, he wandered as a journeyman at Hood College, American University, Stevens College and Kent State, ultimately attaining master's status at three land-grant universities in the midwest.

Over a span of 60 years, Form traces his changing research interests. His remembrances, shaped by the interaction of family, work place, and politics, offer fresh insights into the state of academia from the Depression to the present. In the pre-World War II years, departments which were linked to social work changed drastically in the post-war period, especially in research universities, to build a scientific discipline. The turmoil of the Vietnam War and the civil rights movement in the 1970s further changed the intellectual and political life of the discipline. In an eloquent manner, Form reiterates the transformations he has witnessed throughout his journey in society, the discipline, the university, and the American Sociological Association.

The volume will be of particular interest to sociologists, social scientists, social historians, and specialists in ethnic studies.